I am Ivy Mashoba from the Leeudoringstad Advice and Development Centre in Leewdoringstad, Maquassi Hills Municipality, in the Kenneth Kaunda District (KK).

I started with CMAP Black Sash since last year 2011. They taught us about monitoring and how o interview government structures, especially social services departments, municipalities, and SASSA and all those structures. So the achievement is that we even have a chance to go to those government structures and talk to the officials to tell them about our role – as coordinator of the Advice Centre, as I was trained by the Black Sash and they were happy about that.Right now I have (developed) a good relationship with SASSA. I have not been able to visit and inform the health department and other government departments about this project yet – for now.(However), I managed to interview the beneficiaries of SASSA and I have received negative and positive answers (about the type and quality of services). I filled in the questionnaires and forwarded these to Black Sash (for analysis). SASSA is aware of Black Sash (locally) – and they are inviting me to their workshops and meetings. They communicate with me and even use my office to help the community of Kagala.

How are they helping the community through your office?

With SASSA applications. They come two times a week, every Monday and Friday. They previously used to come very late – but now they come at 08h00 and leave at 16h00.

Why do you think this change has happened Ivy – did CMAP have anything to do with it?

Because of CMAP directly, and since I explained CMAP to them and why it is necessary to interview them and that we continue to point out things that we are not happy about.
March 2012

My name is Ben Kolojane and I am from the Letsopa Advice office. Our region is the  Ngaka Modiri Molema District and we are in Ottosdal in the Tswaing Local Municipality. We are doing CMAP which was initiated by Black Sash. Since we joined CMAP, there’s  been a lot of improvements in our entire municipality.We are doing Home Affairs monitoring, also at the Department of Health at a local hospital, and some Basic Service Delivery monitoring. Since (we started monitoring) then there has been a lot of improvements.  Currently our office has been affected a lot because we got recognition as a result of the CMAP project. Previously it was considered as a “fly by night organisation” but CMAP gave us recognition. In the Tswaing municipality this recognition has happened due to our work in the farms, around villages and in townships and even in towns.

Tell us of your recent experience of participating our SASSA report to SASSA North West leadership?

I was very happy since it shows that the reports from our clients is not just used for fun, but that the work we did with people is being taken to a higher level. It was exciting since we were there with SASSA officials at a provincial level and they showed their appreciation of the work that we collected data through CMAP. It was an exciting moment of recognition of our organisation at this level.

Your views, Ben, on other recent reports –such as the national CMAP Health reports?

These are very important reports. The findings are not fake, but genuine. Recommendations to these reports (developed by CMAP monitors and the Black Sash) is done not doing it for political gain or political scores, but for service delivery and helping to hold government accountable for the promises they made.
March 2012 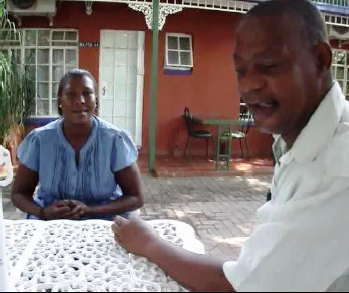 I am Mantsho Molokelwa Thusanang Health Care Centre  of Verdwaal (Itsoseng). Since joining the CMAP project – there has been a lot of improvement where I stay. I met with SASSA people, and came to a written arrangement with them. Since then my working relationship with SASSA in my area has improved as well. The community is pleased with my work.I had an issue with identification of a SASSA employee since he had not visible identification – even though he drove a SASSA vehicle. This has now been corrected. The level of interest in my local community is high. These include some of the security officials at SASSA – some of whom want to join!

You come from a community where a very sad thing happened – Verdwaald is known in the media recently where children following their mother seeking food died in the open veld. Is there something you wish to say about that tragedy?

What happened was that before the tragedy, the family was under their organisation’s caregiving (Thusanang). One of the deceased of this family was disabled. Thusanang caregivers were very involved with this child and used to visit their home and bathe the child and provide the necessary care. After the tragedy, the local councillor went with their organisation so as to provide support to this family. We went with the councillor to make sure that “he did his work” and this included providing social relief for the family.The organisation that provided direct relief through food parcels was the Gift of the Givers. Two of the volunteers of my organisation was asked by the community to assist Gift of the Givers in ensuring that this family received food parcels.
March 2012

CMAP Stories from the Field