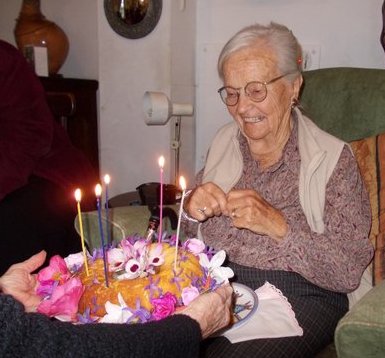 Else will be remembered as a warm and supportive friend with forthright opinions, which could on occasion be very intimidating. She had a strong social conscience, and in her unstinting work for marginalised people, showed enormous determination and compassion. She enjoyed a good party, and hosted many of these, gathering together a wide cross-section of people - red wine, analytical and stimulating discussions, and much laughter.

Else was a founder member of the Women’s Defence of the Constitution League (WDCL) – which later became known as the Black Sash - launched in Johannesburg in 1955, and was part of a march of 2 000 women through the streets of Johannesburg from Joubert Part to the City Hall, protesting about the Senate Act which was designed to remove coloured voters from the role. As a member of the Liberal Party she felt that her presence might counter the strong United Party domination of the WDCL membership.

Also in 1955, she was deputised by the Johannesburg committee to travel to Natal to talk about the purpose of the WDCL, and look at the possibility of forming branches. She had contacts in the region, mostly from the Liberal Party, and lists of members of the Torch Commando, and anti-racist, anti-fascist organisation of World War 11 veterans. Her visit resulted in the formation of the Natal Midlands Black Sash. She said of this trip “It was an absolutely exhausting ten days, meeting strangers every day, trying to put forward a message which was brand new and very foreign to people’s thinking. Nobody had thought of mounting a massive nationwide women’s protest before.... so it was quite a battle.”

Else moved, with her husband Denys, to Pietermaritzburg in 1959 when he appointed as professor of Inorganic and Analytical Chemistry at the University of Natal.

In 1963 when B.S. membership was opened to all race groups, something that Else had strongly advocated for some years, many considered it to be too late, because by now the ethos of the B,S. was established as white and middle class. Else stopped her active involvement in the Sash and joined the National Council of Women because it was a non-racial organisation and she desperately wanted to be involved in such a group. Though she remained a committed member of the B.S. she did not take on further leadership roles.

She worked tirelessly in the National Council of Women in Natal, becoming president between 1983 and 1986. She continued her work with women in the Women’s Coalition, formed in 1992, with the specific aim of developing and promoting a Women’s Charter which was finally adopted at Convention for a Democratic South Africa (CODESA) talks. In Pietermaritzburg, Else was chairperson, when the Coalition became the Midlands Women’s Group, which continued to champion women’s rights, and publicise the Women’s Charter.

In September 1987 Else’s daughter Jennifer was detained under section 29 of the Internal Security Act. This was the start of a three-year ordeal which saw Jenny enduring solitary confinement and verbal and physical abuse from police officer Lieutenant Frans Mostert. Else and her husband joined the families of the other accused in the case, in the public gallery of the Cape Supreme Court. It was during this period that Else wrote from her notes and letters Time Stretching Fear, a book recording this stressful period. Jenny was eventually granted full and unconditional indemnity on March 19, 1991.

Else’s daughter, Barbara wrote, “She spanned a life from ox wagons to the internet, with a passionate commitment across it all to making the world a better place.”

Else will be sorely missed by her family, and the many people whose lives she touched.