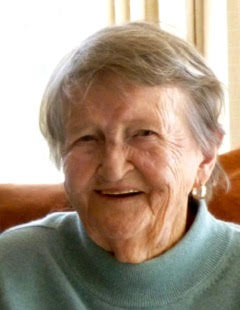 Betty Davenport was one of the first cohort of women who formed the Black Sash in the Western Cape, joiningin 1955 a few months after it was founded in Johannesburg. She was then newly married, and teaching at Herschel School, but was able to take part in the early protest demonstrations and picket stands.

Her first child was born in 1956, and her Sash activities were somewhat curtailed for the next few years, until she and her husband Rodney moved to Grahamstown in 1965.  The Black Sash in the Eastern Cape had been through many difficult times, and branches and regions were closing, or becoming very small, as support for them dwindled.  Betty was among those who revived the Albany Region, and they devoted their energy to building up the Advice Office in Grahamstown, which re-opened in 1972.  She remembers with great warmth the older members who had never wavered, and were “great characters”, and the renewed energy with which they confronted the area’s many challenges over the next decades: social welfare issues such as pensions at first, then also the forced removals in terms of the Group Areas Act.

The Grahamstown Advice Office opened on Saturday mornings, and at first was staffed almost entirely by volunteers.  They came to know the area and its problems well, and to be known by the local community.  As tensions grew, the work expanded into the surrounding areas, where people were being subjected to detention without trial and repression of all protest and resistance.  The Black Sash was involved in support for detainees and their families, helping to arrange transport, working with other organisations to provide food and other assistance.  Betty had been teaching at DSG, but during the 1980s she worked as the regional manager for the Black Sash, together with Jonathan Walton who is still with the organisation 30 years later.

In 1990 the Davenports moved back to Cape Town, and once again Betty found in the Black Sash friends and fellow workers who shared her commitment and beliefs.  She dedicated herself to the Advice Office in Mowbray.

After 1994 and the installation of the new democratically elected government, Betty formed part of the Black Sash’s “Legiwatch Group”, established to monitor the changes in legislation taking place and to keep a watching brief over the protection of human rights.

In 1995 the Black Sash Trust was established, and Betty was appointed as a trustee. She has made an important contribution to the organisation for over fifty years.