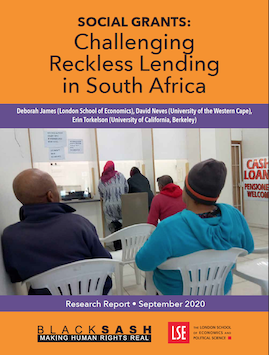 South Africa has a large social grant system meant to provide assistance to vulnerable individuals including the elderly, disabled and children. These grants have however become the object of, or collateral for, debt. Grant recipients often need extra money for emergencies and unexpected expenses, but credit options available to them entail exploitative products or practices.

This research report uses case studies to explore the ways in which grant recipients access credit in both formal and informal sectors with a series of recommendations. 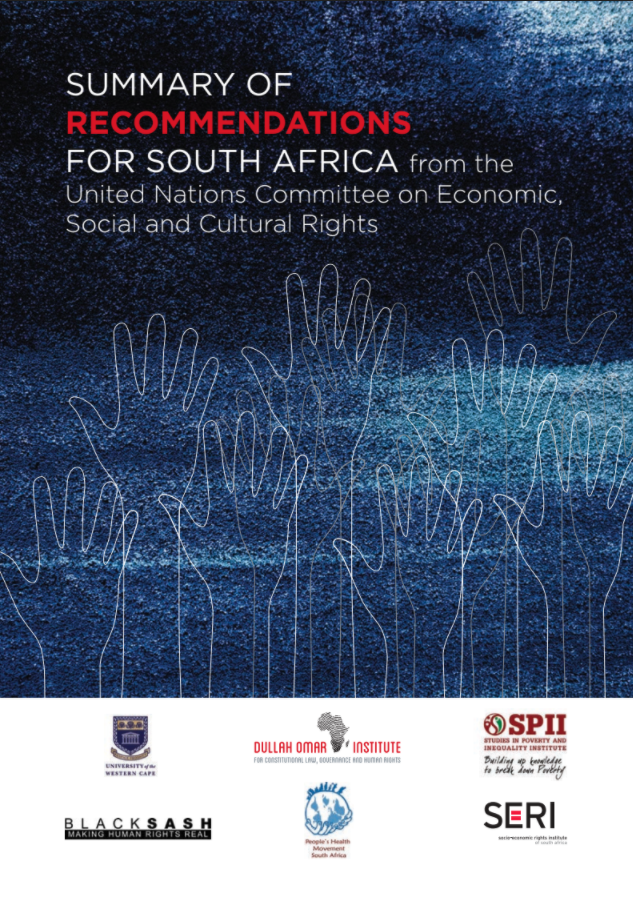 SUMMARY OF RECOMMENDATIONS FOR SOUTH AFRICA from the United Nations Committee on Economic, Social and Cultural Rights 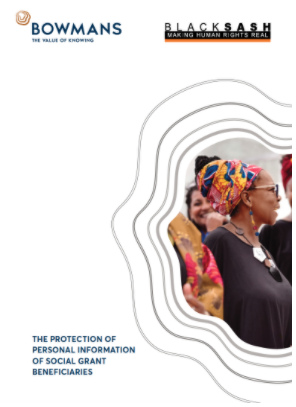 THE PROTECTION OF THE PERSONAL INFORMATION OF SOCIAL GRANT BENEFICIARIES 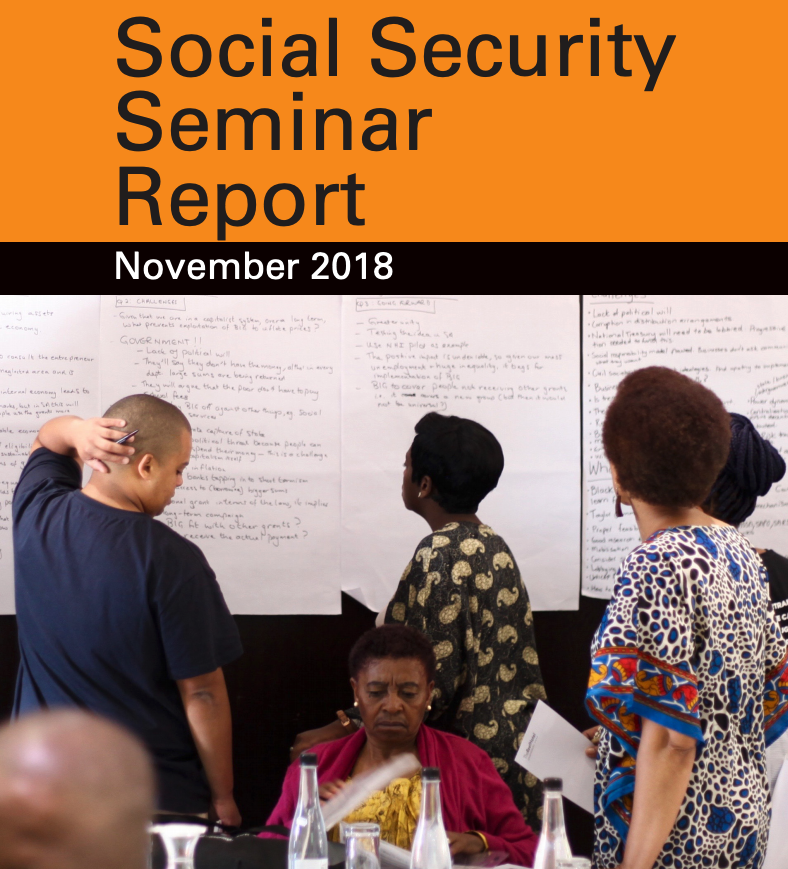 This report documents presentations made at the third Social Security Seminar on a range of topics related to comprehensive social security for South Africans, in particular adults aged 18–59, among whom there is a high level of unemployment and no social assistance.

Read the full report on the 2018 Seminar 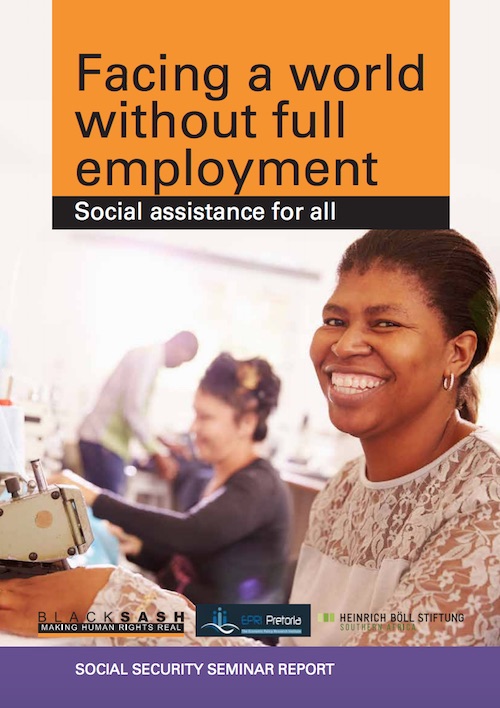 The aim of this seminar was to stimulate debate in support of how to respond to the needs of unemployed and destitute adults and to put income squarely on the agenda. 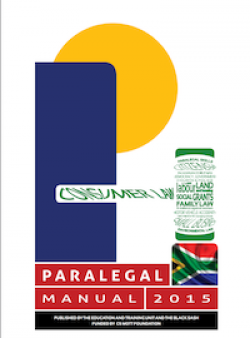 The Paralegal Manual is an invaluable tool for anyone who works in the field of development and access to justice. It provides up-to-date information on most of the laws and legal procedures that affect everyone who lives in South Africa. The manual has been specifically developed to aid NGOs, advice offices, shop stewards, community development workers and others who assist disadvantaged individuals and communities to access state services or to sort out legal problems. 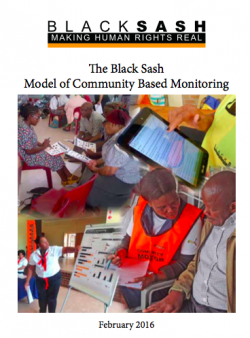 THE BLACK SASH MODEL OF COMMUNITY BASED MONITORING - FEBRUARY 29, 2016 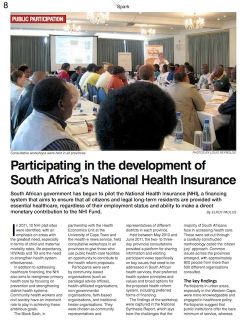 "The Black Sash, in partnership with the Health Economics Unit at the University of Cape Town and the Health-e news service, held consultative workshops in all provinces to give those who use public health-care facilities an opportunity to contribute to the health reform proposals." 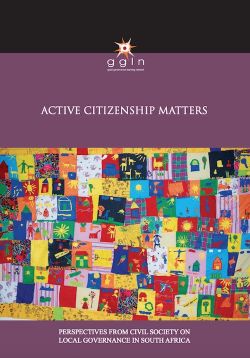 "This publication explores how the notion of active citizenship can serve as an analytical concept to review the nature and quality of participatory local democracy in South Africa. It also considers it as a paradigm to inspire new models and practices that are relevant in South Africa’s development context." 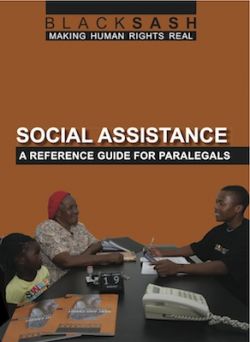 This reference guide is part of a series of Black Sash guides for paralegals and other people and organisations who provide advice regarding people’s socio-economic rights. It draws on the Black Sash’s extensive experience of assisting people with difficulties in accessing social assistance – with a view to enriching your understanding of this area of law, the kinds of challenges that can be faced and what can be done about them.

The guide has been designed to help you find answers to some of the questions you may have, by dedicating a separate chapter to each social grant or award. Social assistance laws continue to change, following the government’s commitments and advocacy from the public. We hope to have captured in one publication as much up-to-date information as possible to help people in advice offices advise their clients – towards promoting efficient access to social assistance. 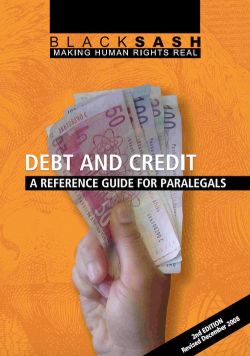 The guide is intended to assist paralegals and others – like priests, trade union representatives, and social workers – who give advice to vulnerable people struggling to make ends meet.

The guide explains the terms and processes relating to debt and credit – such as over-indebtedness, court orders, negative listings, credit agreements and the role of the Credit Bureaus – as well as providing practical tips and templates for drawing up household budgets and assessing your financial and legal situation. 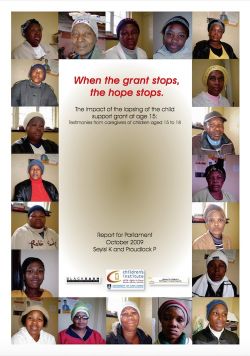 “WHEN THE GRANT STOPS, THE HOPE STOPS"

The impact of the lapsing of the child support grant at age 15: Testimonies from caregivers of children aged 15 to 18

A Report for Parliament compiled by the Children’s Institute (UCT), Black Sash, and ACESS and released on 21 October 2009.We wanted to find out what happens to children and their families when the Child Support Grant (CSG) stops at the age of 15; to show this evidence to Parliament; and to appeal to Parliament for assistance in ensuring that the CSG is extended to18. 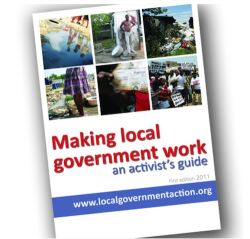 The guide shows how to “engage government from inside by participating in formal processes, and from outside by going public through complaints, petitions, protest action, the media and the courts”The Black Sash will be using this guide in various training situations with community organisations in our various networks. The manual will be used as a basis for training and support, as well as for  developing partnerships. 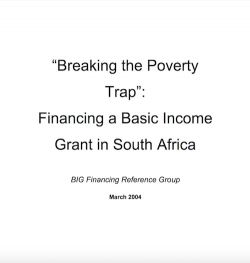 Nearly a decade after South Africa’s historic transition to democracy, pervasive poverty and inequality pose the greatest threat to human dignity and social cohesion. Roughly half of our population – including two thirds of all children – continues to live in poverty, despite a significant expansion of social service delivery. Our current social security system has shown the effectiveness of income transfers in combating poverty.

However, the social safety net inherited from the apartheid era was modelled on the “welfarist” programmes developed for industrialised countries, which assume close to full employment and are designed to address special contingencies and fluctuations in the economic cycle.