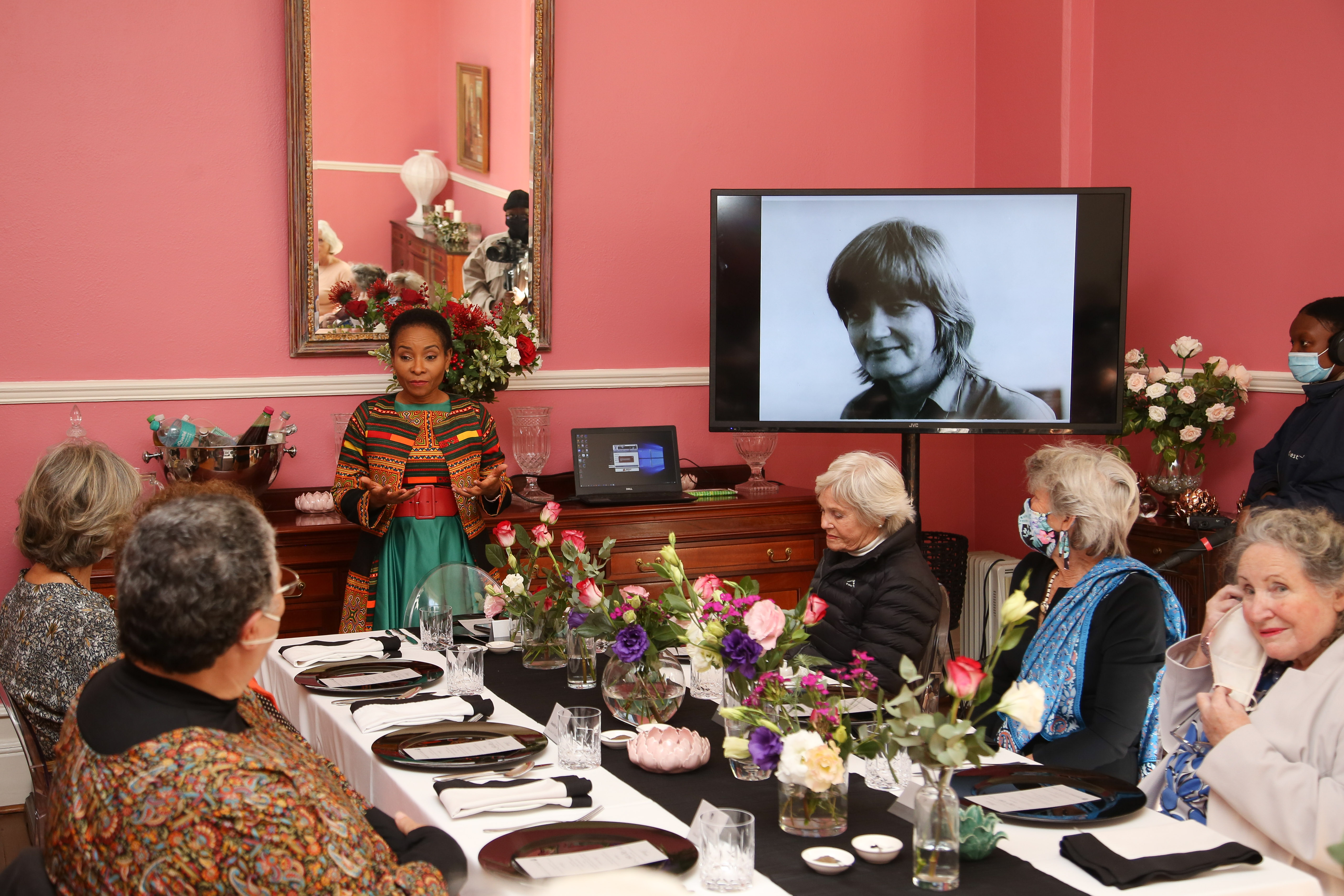 "It was an afternoon of reflection, recollection, laughs and hearty conversation as a group of Black Sash stalwarts gathered at the University of Cape Town (UCT) recently to celebrate the organisation’s 66th anniversary.

The event was hosted by UCT Vice-Chancellor (VC) Professor Mamokgethi Phakeng at Glenara, her official residence, and she was in good company. Professor Phakeng was joined for an intimate lunch by Babalwa Ngonyama, chairperson of UCT’s Council; Mary Burton, president of the Black Sash (1986–1990) and a former member of UCT’s Council; and former UCT VC Dr Mamphela Ramphele. Several other Black Sash stalwarts also attended the event."

Mary Burton, Patron of the Black Sash, wrote the following to mark the occasion:

It gives us all great pleasure to thank you, Vice Chancellor, for this celebration of the 66th anniversary of the founding of the Black Sash.  I would like to thank also the many people who have put this event together, not least Russell Ally who first approached us with the idea, and also the wonderfully patient and efficient Melverna Wakefield.

It is particularly special for us to be meeting here in your official UCT residence, Professor Phakeng, as many of our members are alumnae, and the archives of the Cape Western Region of the Black Sash have been housed in the UCT library, and will continue to be so.  It was an enormous relief to us to learn that they were part of the many archives that were safely recovered after the dreadful fire that has caused so much damage and heartbreak. 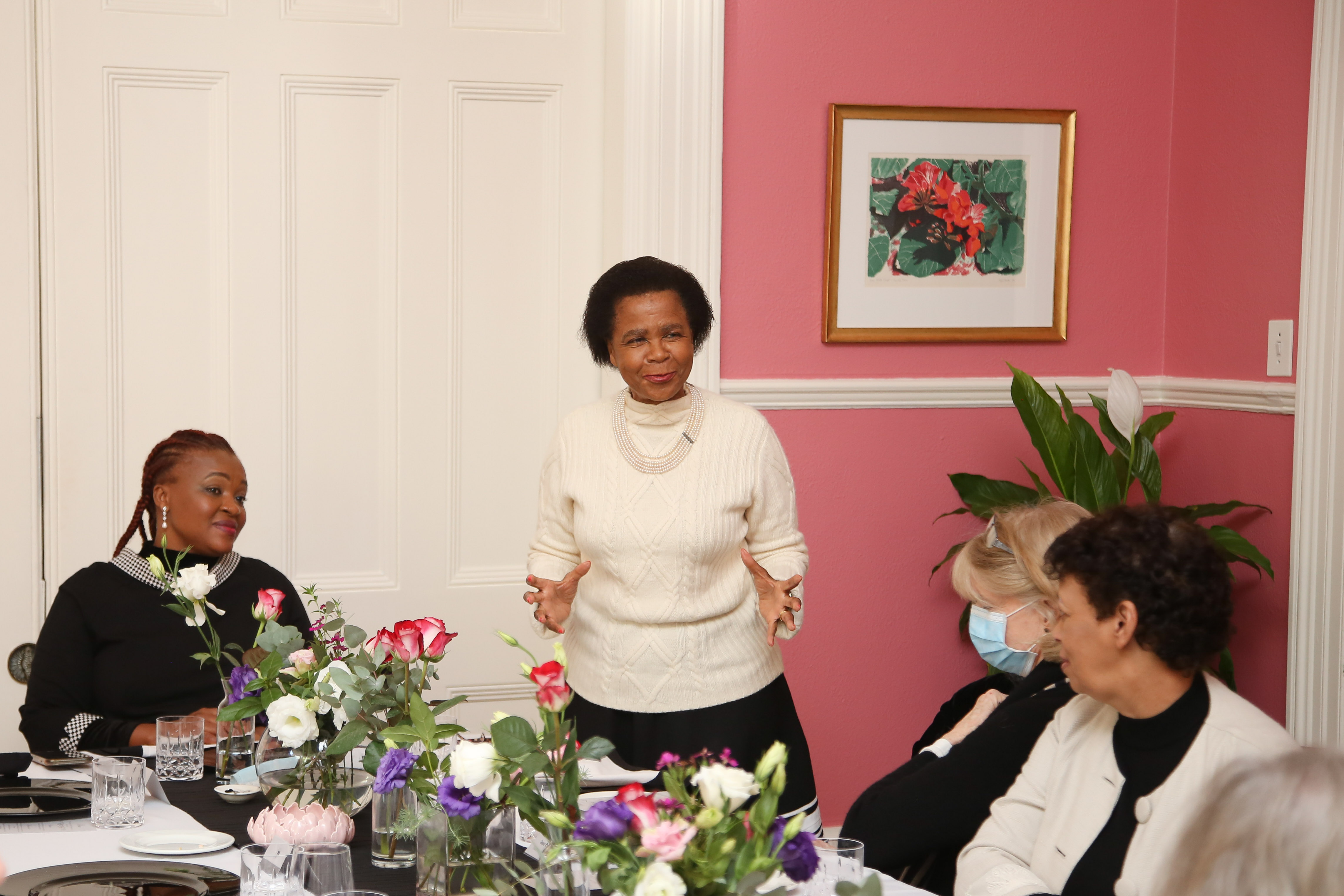 It is also a moment to recall that in the past, women who studied at UCT under the apartheid system of a special permit refused to attend graduations or any other ceremonies, among them people who were part of our teams.  It is good to know that the injustice of that system is now in the past and the university is open to all.

The first conversations we had about this occasion referred to ‘Black Sash stalwarts’, but several of us felt that this should not be interpreted as ‘veterans’, but rather a mix of past and present people connected to the Black Sash – members, activists, specialists, staff members and trustees.  To limit the list of women to be invited to this lunch to those that could safely be seated in your dining-room was very difficult, and made me realise that after COVID we should arrange a large gathering of Black Sash people.  Many Sashers have sent good wishes for the anniversary occasion, such as this message from the Eastern Cape:

It comes from Judy Chalmers and Rosemary Smith from the cities of Gqeberha and Makhanda respectively   who send warm greetings to us all and are sad that they cannot be here.  “We remember all those brave people we met in the course of our work and honour them and our fellow workers in the struggle against Apartheid.”

Anniversaries make us look back at our history.  We remember the stories that are told and re-told about the excitement and enthusiasm of the first generation of Black Sash women – their belief that it was possible to prevent the withdrawal of the franchise from those voters who were classified ‘coloured’ – the last remnant of people other than white who had held that right - and their fury at the tampering with the clauses of the 1910 Constitution.  They wore their black sashes as a sign of mourning for the loss of constitutional rights.

Throughout 1955 there were thousands of women all over the country who joined the “Women’s Defence of the Constitution League”, in pickets, protest marches and petitions.  We do not know how many – the numbers were estimated at between 10 000 and 20 000.  Mirabel Rogers says in her book telling the story of that first year that the signatures of 100 000 women were gathered for their petition to the Governor-General against the Senate Bill.

They were all white women, living under a system where apartheid was being steadily entrenched in law, but which had been in practice in some form or another for generations.  As those who had the privilege of the vote, they felt the responsibility to oppose unjust laws.   But it was to be many years before membership of the organization was open to all South African women.

After the optimism of that first year faded, the number of members and supporters dwindled.  Only those who were truly committed to the long-term struggle for constitutional justice remained, and the organization never grew much beyond 2000 members throughout the country, often far less. 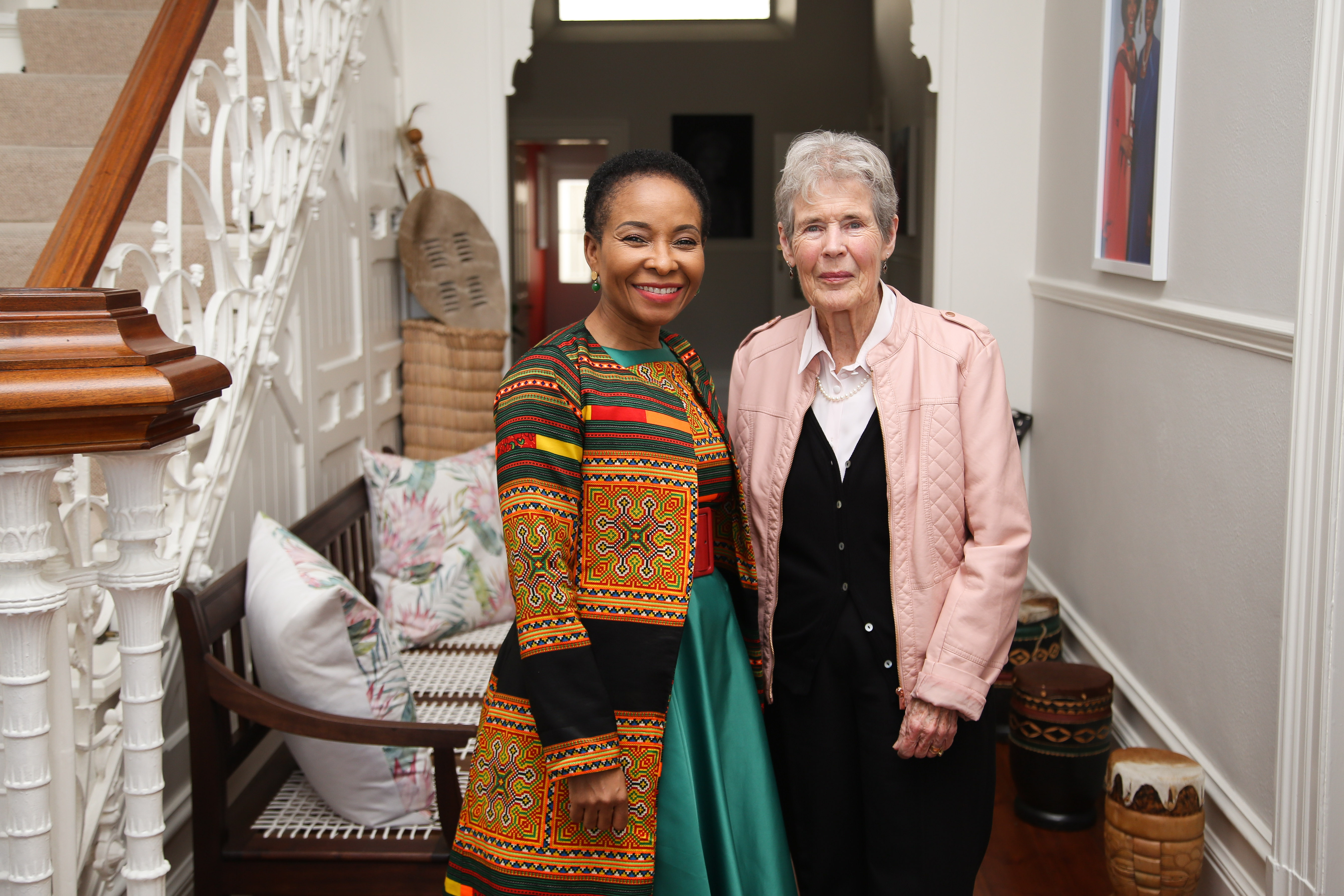 What sustained them through the hostile environment of the 1950s and ‘60s?  In the first place the government’s determination to force the hated pass laws onto women.  9 August 1956 saw the mass gathering of the Federation of South African Women in Pretoria protesting against the pass laws, and Black Sash women were alerted to this aspect of apartheid and found ways to respond.  In 1958 its first Advice Office was opened in Cape Town and others followed in other cities.  The daily contact with people whose lives were entirely subject to the control of the pass laws made it impossible to ignore such suffering and injustice.

In the years of the steady entrenchment of apartheid the uphill task of opposition was mitigated by the companionship of working with women of like mind and common purpose, which kept the members together in mutual strengthening and solidarity.   Some of the leading members were brilliant women, senior academics, students of politics, lawyers, speakers and writers of distinction.  Others were willing to take on all the mundane tasks of running a voluntary organization, and over the years the more challenging ones of monitoring and bearing witness to the growing resistance, in the courts and at public events.  All of them were encouraged by the words of anthropologist Margaret Mead, “Never doubt that a small group of thoughtful, committed citizens can change the world; indeed, it's the only thing that ever has”.

In the late 1970s and through the 1980s growing opportunities to work together with other women’s organisations, as well as community-based organisations, provided new stimulus and a sense of joint participation in that task.

After the installation of the first democratically elected government in 1994, the Black Sash went through a long and sometimes difficult process of deciding about its future, which resulted in the closure of the membership structure and the establishment of a newly defined Trust to manage the advice offices, which were still much in demand.

The vision for the future was a society in which the needs of the poorest and most vulnerable of its people would be addressed.  The old discriminatory structures of health, education, social welfare and distribution of resources would have to be unbundled and new systems introduced.

This is where the focus is today, and the Black Sash Trust has been at the forefront of the battle for South Africa to create and deliver an adequate system of social protection.  Years and years of seeking to work with the new government, but also of protest, of gathering evidence together with community-based partners and of bringing the matters to the courts have resulted in clear progress.  One of the success stories was the exposure of collusion in the fixing of the price of bread.  Over the past years the campaign has been to carry all the way to the Constitutional Court the way in which the payments of social grants had been manipulated.  “Hands off our Grants”, known as HOOG, became the call to ensure that grants were paid efficiently, fairly and honestly.  Soon to come will be a book telling that story.  The pressure to work towards a Basic Income Guarantee will not diminish.

At this time in our country when our still-new democracy has been under threat, and our admired Constitution needs protection, we can be proud of the legacy which the Black Sash Trust has carried forward.  Represented here today are some of those responsible for this ongoing work, and others who have taken their skills into new areas.  All remain dedicated to the quest for a just and equal society.

Once again, Vice Chancellor, we thank you for the opportunity to celebrate with you these aspects of our history, and to recognise that we share these values with your university. 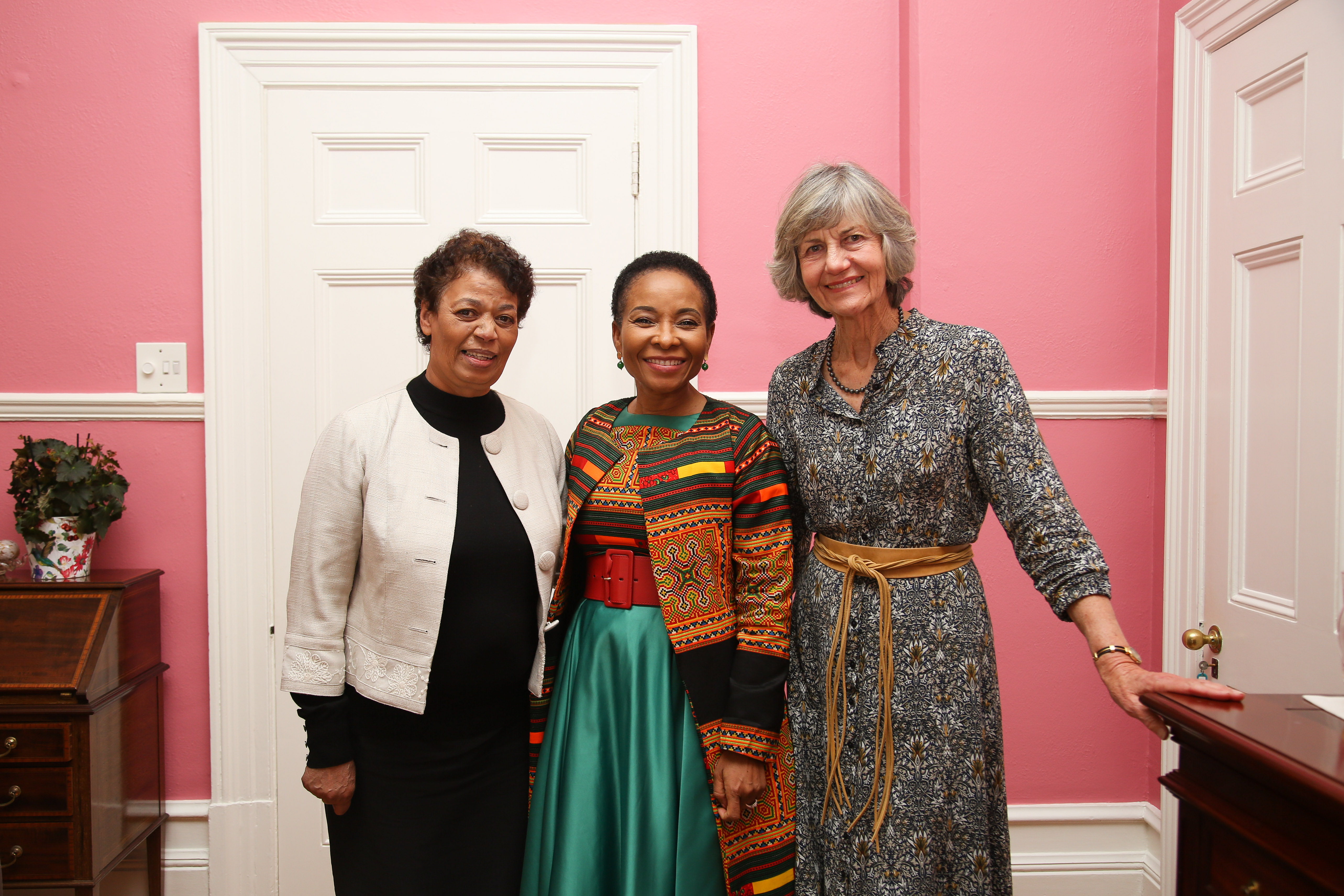