Wellington Ntamo was a paralegal with the Black Sash (Gauteng Regional Office) for 23 years. For the past few years he had worked tirelessly responding to queries on our Helpline. 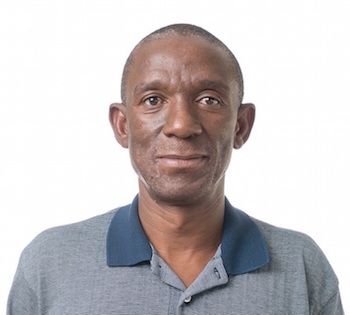 We could always rely on his in-depth knowledge and experience. We grieve not only at the passing of a remarkable individual, but also for the loss his family suffers.

A tribute by Jonathan Walton

On the passing of a friend, Antoine De Saint-Exupery, French Writer once said: “He who has gone, so we but cherish his memory, abides with us, more potent, nay, more present than the living man.”

I am honoured with the opportunity to articulate the character of the late Wellington Ntamo who was a friend, colleague and brother to all of us in the Black Sash.

Having being acquainted and connected to Wellington for such a long time is beyond description. Wellington, or “Welly”, as he was affectionately known to many or all of us, was a person with admirable characteristics which rubbed off on me as a person and colleague. When I met Wellington for the first time at a national meeting, it was not too difficult to associate or connect with him.

When I introduced myself to him in isiXhosa, a long-lasting camaraderie developed which I will treasure for a long time. The camaraderie was molded and informed by having good social and work related conversations. In many topical and sometimes uncomfortable conversations, I observed that Wellington had a rare ability to listen carefully but never used emotion or aggression to defend an argument. Unlike other characters in the body politic, Wellington was never a rabble rouser.

Through camaraderie and mutual respectfulness, I have no doubt that the collective in the Black Sash will remember Wellington as a person with deeply rooted principles and as a person who embraced compassion with ease. I will memorize Wellington as an open book, uncomplicated, extremely wise and a likeable person. Whenever we had a chance to discuss the behaviour of politicians, Wellington once said: “Comrade Johnny, there’s a fundamental difference between a clever person and wise person”.

I responded in the following manner: “Comrade Welly, do you mean grammatically speaking or otherwise?” Welly’s response was: “Comrade Johnny, a person who is wise, is “ngumntu osebenzisa ingqondo” (a person who is using his or her brains or head) and a clever person “ngumntu ongacingi kakhulu “ (a person who doesn’t think a lot).

Without any contradiction and speculation, Wellington was unpretentious and resolutely committed to the Black Sash and its objectives.

To conclude, the following German Proverb suffices: “The death of a friend is equivalent to the loss of a limb.”

Ntate Wellington, deep in our hearts memories are kept, and your humbleness shall never be forgotten. God bless you and keep you in his care until we meet again.

Gone, but never be forgotten.

Your life was a blessing, moment of treasure that planted a seed during our working moment.

You may be gone, but your memory will live on as equal as your contribution to the life of people that you helped during your living years. May your soul be at peace and God reward you with a title of "A quiet mentor in his time".

As you take the journey to the next life, which our tease cannot delay, nor derail, we wave a hand of sorrow and sadness, while in our voice we say farewell to a fallen comrade.

You may be gone, but never be forgotten.