Bunty Biggs, born in 1919 of missionary parents in Bangalore, India, who became a committed Quaker, social activist, and stalwart of the Natal Midlands Black Sash, died in England on Monday 13 November 2017. 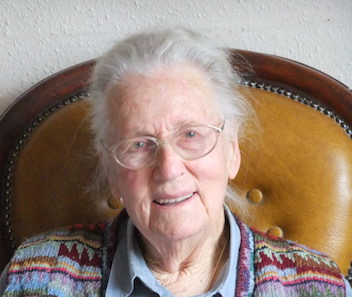 A social worker who worked for Quaker Relief, she spent time in post-war Germany working with displaced persons, particularly children.

She then lived in Pietermaritzburg from 1954 until 1981, playing an important role in the community. Bunty was clear thinking and concerned with matters as diverse as forced removals, education of young people, and conditions in townships, believing that all people deserved equal rights.

In the early fifties, when Bunty visited Edendale Hospital, where her husband, David, worked as an orthopaedic surgeon, she described being completely taken aback by the huge wards, crowded with people, and was particularly distressed by children sitting in cots with nothing to do. She arranged for people in England to send gifts on a regular basis over a long period of time. Toys and games were soon followed by clothes and handicraft materials which enabled poor women in Edendale to organise sewing groups.

Shortly after settling in Pietermaritzburg, Bunty joined the Natal Midlands Black Sash and the Liberal Party. She was particularly impressed that all who accepted the principles and practices of the Liberal Party were welcomed regardless of gender, class and race. She also considered it an important learning place because of the stimulating meetings which provided insights into the lives of people whom she didn’t normally meet on a social level.

Bunty served on the committee of the Natal Midland Black Sash for twelve years, chaired the region for three years, from 1977 to 1979, and was an enthusiastic volunteer in the Advice Office. She was a vigorous correspondent to the local press, her letters on behalf of Sash or in her private capacity always relevant and challenging.

Bunty said that Black Sash protest stands gave her the opportunity to stand up and be counted, and were important, showing passers-by that the apartheid system was, unjust, unfair and unacceptable. She remembered protesters having stink bombs, and toilet rolls thrown at them, people shouting rude names, as well was the inevitable photography indulged in by the Special Branch.

In 1981 Bunty and her husband left South Africa to retire in England, leaving a strong legacy of their commitment to social change in South Africa.