It is with sadness and regret that we have learnt of the passing of Dot Erlank on 13th September.  Dot was a dedicated worker and activist in the Black Sash during the 1970s and 1980s. 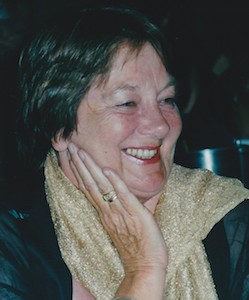 The memorial will be on Tuesday 19th September at Rondebosch United Church, Belmont Rd, at 15h00.  Missed already by her four daughters Dominique, Vanessa, Natasha, and Cate: her grandchildren, Connor, Daniel, and Ella: and her darling sister, Nina, and loving friends. Donations in lieu of flowers.

Dot Erlank had lived in Cape Town for most of her adult life. She was a student at UCT where she achieved not only a BSc and a Masters in Applied Maths, but represented her university and province in swimming. She also lectured at the university.

She married Professor Tony Erlank and they had four daughters and three grandchildren.

Dot was an early and active member of the Black Sash in the days when the apartheid government made life so difficult for so many people. She was a very strong character who always believed in standing up against unfairness, and she had many stories to tell about those bad old days.

She developed emphysema later in life and became dependent on an oxygen machine day and night; but despite the many difficulties and irritations she must have suffered, there was never a word of complaint. Her friends will all recall her love of a party and her ability to sing a myriad of music hall songs. She will be truly missed by many of us.