It is a sad coincidence that two prominent Eastern Cape Black Sashers should have died of Motor Neuron disease within two years of each other. Sue Power a former leader from East London Sash died in January 2015. And now Priscilla Hall in July 2017. 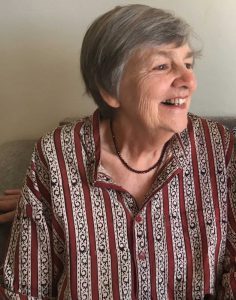 Priscilla died on her own terms, putting in place everything that needed to be done including handing over valuable archival material and then declining any further life prolonging drugs or equipment. She died with her beloved family at her bedside.

It is impossible to encapsulate Priscilla's life into a few words. Activist, meticulous researcher and recorder, egalitarian in her approach to all people, editor and a fine wordsmith describe many of her attributes. She worked hard for the dispossessed and the destitute.

From 1966 onwards she worked tirelessly with the Sash and other organisations organising a school Bursary Fund, fighting forced removals,helping found the Grahamstown Rural Committee and the establishment of the Dependants Conference, and working with detainees and their  families. She also worked in the early stages of SACHED in Grahamstown. The Apartheid authorities harassed and intimidated her and then finally she was detained under the state of Emergency in 1985.

Post detention she turned her organisational skills to the Grahamstown National Youth Music Competition, worked with Fossils at the Albany Museum, arranged classical tours to the Middle East and helped to establish the Community Outreach  project at Rhodes University. Priscilla was a wordsmith of note with an original turn of phrase both in conversation and writing. Latterly she became an editor and there are many South African authors and authors further afield who are grateful for her fine work.

She pushed the boundaries and expected others to do the same. She was both ideosyncratic and eccentric never pandering to anyone's expectations of what she should be. Nomkhita Gysman, who worked with her, described her as courageous and said "she sacrificed her whiteness and privilege to stand with the voiceless" while fellow anti apartheid activist Phila Nkayi described her as an inspiration, mentor and mother figure.

We, in the former Grahamstown Sash mourn her loss deeply but feel fortunate to have shared some of her life. And the Eastern Cape has been all the richer for her presence in it.

Hall was one of the ‘good women’ madiba referred to

Until the last days of his life, President Nelson Mandela refused to take personal credit for having been the architect of the post-apartheid “rainbow nation”. He always said that while he was in prison there were many “good men and good women” who quietly worked to achieve normal race relations and to liberate him from prison. He also called for vigilance against the privatisation of the gains of democracy by those who would seek to take the credit and claim they were the sole liberators of this nation from the bondage of apartheid.

Grahamstown’s Priscilla Hall was one of the shining examples of the “good women” Madiba was referring to who made it possible for South Africa to be free at last.

The longstanding Black Sash member died in mid-July and a memorial service is being held for her in Grahamstown today.

Having known Priscilla and Ron since I was a boy, I write not to eulogise the couple but to tell the beautiful truth as I have always known it about two people who honestly practised non-racialism as a way of life. They taught their children that they were Africans, not Europeans wondering on the continent of Africa. As black youth from the townships we were in and out of their home and the Hall’s children literally grew before us.

Priscilla was a lady with amazing energy and an ability to get things done. Through organisations like the Grahamstown African Distress Relief Association (Gadra) and the SA Committee on Higher Education (Sached), she and her colleagues frustrated apartheid and its machinations.

Ron and his children never regretted the time Priscilla spent in the townships with the people and later as a political detainee at St Albans Prison in Port Elizabeth.

They supported her as she soldiered on and continued sharing her knowledge and skills with the underprivileged.

During the turbulent days of the states of emergency she collected evidence of police brutality for publication in the press and for use by lawyers in courts.

These human rights workers were well-known faces in the townships of Grahamstown.

During the times of mass detentions, Priscilla worked tirelessly with members of the clergy such as Bishop Lunga ka Sibotho and other church leaders under the auspices of the Detainees Support Conference.

There were various programmes through which the South African Council of Churches supported the families of detainees and the detainees themselves while they were in detention and after their release, with counselling services.

Many of these human rights activists have since passed on but should be given posthumous recognition for the role they played in our communities in those difficult times. Many of us, as students and township youth, had the privilege of working with them. We never doubted their commitment to being part of the solution to the apartheid problem. We became aware from very early on in our lives that not all white is bad and not all black is good. This formed the ABC of our outlook of the world.

It is doubtful that some of the initiatives we took in those days would have been fully successful without Priscilla, a good planner with an amazing gift of knowing useful people in any institution.

When I told her I had a dream of becoming a lawyer, she readily had a friend to point me to, a Black Sash activist in the person of Kathie Satchwell, a teacher at one of the local schools.

Kathie assisted me with learning English poetry and literature for my matric. She went on to practise law and is now a judge in Gauteng. Priscilla was not just a fellow traveller in the anti-apartheid movement. She realised how the problems we were facing emanated from the system which had to be eliminated.

When the call came from the United Democratic Front to boycott the tricameral parliament elections, Priscilla assisted in the historic One Million Signature campaign. The apartheid state was badly shaken.

She loved us very much as young people but never patronised us or tried to influence our ideological inclinations in anyway. She respected and understood those of us who subscribed to Black Consciousness, which was quite dominant in the 1970s and 1980s.

The City of Saints has always had a good number of Good Samaritans who have stood up for the cause of justice. For example, when the late Mabandla Thembeni, the first black attorney in Grahamstown in the early 1970s was prohibited by the Group Areas Act from opening offices in town, the Methodist Church gave him a space where he could operate.

I understand Priscilla indirectly had a hand in ensuring that the church assisted the now late Thembeni in having offices in town.

The story of the good work done by Priscilla and her contemporaries in Grahamstown can never be finished. As Grahamstown people who benefitted from their social programmes and generosity, we will be eternally indebted to them.

We thank Ron and his children for the time they allowed Priscilla to be away from home and to become the dedicated servant of the people. We loved and respected her very much and know she loved us too.

May her soul rest in peace. God Bless Africa!

Ntsiki Sandi is a Grahamstown-based lawyer and was a co-founder of the Grahamstown Civics Association in 1983. He writes on behalf of many Grahamstown activists from the 1980s and early 90s who worked with Priscilla Hall and were persecuted and detained under the apartheid security laws.

Courageous life in service of others

As news of her death spread through Grahamstown, there was an outpouring of grief as well as camaraderie and joy with people who knew her telling stories of an unconventional woman who lived life bravely, to the full, and usually in service to others.

Fellow anti-apartheid activist and former ANC MPL Phila Nkayi, who had known Hall her since the 1970s, described her as his inspiration, mentor and mother figure.

“She felt deeply any injustice committed against anyone, anywhere.”

He said she had balanced her life as an activist with caring for her family, whom she had loved dearly.

Fellow Black Sash stalwart and a friend for more than half a century Rosemary Smith said Hall had been an activist, meticulous researcher, egalitarian in her approach to people, an editor and a fine wordsmith.

“She worked hard for the dispossessed and the destitute in the 1970s in the so-called homelands and then in the 1980s for the detainees and their families. Idiosyncratic and eccentric, she was a delight to be with.”

Louise Vale and Nomkhita Gysman, who both worked with Hall at the South African Committee for Higher Education Trust (Sached) in the 1980s, described her as remarkably courageous.

“She sacrificed her ‘whiteness’ and privilege to stand with the voiceless – a hero indeed,” said Gysman.

Just days before she died Vale wrote to her thanking her for her “compassion, sharp wit and brilliance”.

In 1966 Hall did her honours in English at Rhodes University under the then head of the English department Professor Guy Butler.

It was there that the mature student met a young lecturer, Ron Hall. They were married in 1968 and she lived in Grahamstown for the rest of her life.