We deeply regret the passing of Margie Satchwell, another of our esteemed founder members.  The Trustees, Director and staff of the Black Sash pay tribute to her for her contribution to the founding of the organization in the Eastern Cape and extend their deepest sympathy to Judge Kathie Satchwell and her family. 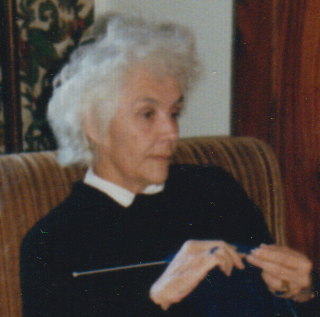 Kathie followed in her mother’s footsteps and became a member of the Black Sash.  Margie died in Port Elizabeth on 28th August, 2015 and Kathie writes as follows about her mother:

Black Sash – mothers' milk to me. Mommy was a founding member in PE – I have just read Mary’s [Burton] book and so many names were familiar – Peggy Levy, Di Davis, Alison Pirie and so on.   In 1962 my father’s cousin was transferred from PE for Firestone to Portugal and then greater things and his wife ran inside to put her Black Sash badge on her scarf – found it now as going through all the bits.   So the Sash got into the paper.

My first stand was in my school uniform in Matric outside PE Mayors Garden – not quite Black Sash as I was only 16 and certainly not a voter. Someone complained to the school and dear Sister Columbanus said something to the effect that the Lord himself had been quite a protestor.

My mother was first a Roman Catholic, then a liberal.   She was very involved in the Liberal Party and then the Progs – my brother and I were slave labour on Saturday mornings filling Prog envelopes.   And the Black Sash was part of it all – which I so understand – women work well together,  focus on issues,  get on with it.  And I now find it interesting which of her friends were and which were not Black Sash members.  Her best friend wasn’t, but so many other women (now all gone) were.   With the 1960, or was it 1961, emergency she and my father had people to “stay” – one was a man called Roberton known as ‘Robbie’ who was told not to mention on pain of death to my visiting great aunt, Mrs Charlotte Robinson, that he was hiding with us.  My parents went out and came back to hear the aunt saying “Robbie did they torture you in gaol?”

Judy Chalmers reminded me that she went to vote for the Progs in an early election and was accosted by the United Party  former mayor of Port Elizabeth – ‘What on earth would make you vote for these people’.  My mother who was (wo)manning the Prog table stood up and said “Justice”!

When the 1994 elections happened, Mommy voted ANC, but not again. But she had a very soft spot for Dali Mpofu of EFF who was my articled clerk.

She grew up in Springs – mother an Irish Catholic nurse and father a Scot from Island of Skye.  They met when my grandfather was nursed by a military nurse during WWI.  I cleaned up medals a couple of years ago and discovered they were not medals of grandfather and his killed brother but of grandfather and military nurse who became grandmother. My mother went to a convent school and trained as nurse at the Joburg General.  She met my father who was a doctor there and they were engaged.  He then studied surgery in Edinburgh after the war and mother went over and they married.  I was born while they lived in England.

They returned to SA – PE – and five more children (the ashes of one is with my father and mother at the church). Mommy drank copious quantities of tea, read all day and learnt to knit at the same time – so each child wore homemade jerseys until we were desperate for something store bought.    When about 35, she did a degree in isiXhosa and English.  The depression had put paid to any chances of further education before the war. She loved being a student with her other “oldies”.

Mommy was 88 this year. My father died 10 years ago – he had stroke and could not speak for nearly 20 years  which was hard for both of them.  She has been frail for the past two years and put herself into Nazareth House in PE.  We objected (it is truly awful) but she was adamant. She still drove.  She gave up playing bridge the week before she fell and was in great pain which basically killed her – she was so sore,  couldn’t breathe, oxygen,  then faded away.

The family has had a good time laughing and crying and reminiscing – she was ready – “there is time for every season…. a time to live and to die” - but as older generations go, so does the past.