Mila Zille was born Mila Cosmann on the 18th of January 1919 in Essen, Germany, the fifth and youngest child of a Jewish father and Protestant mother. She died on Saturday, the 31st of January 2015 at the age of 96. She had lived her life through a tempestuous time of world history, which shaped the person she became. 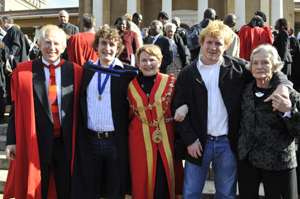 I would like to share with you some impressions I gained of Mila over the 34 years I knew her, and how she came to be who she was by reading two excerpts: first from her daughter Helen’s acceptance speech when the Freedom Award was bestowed on her by the Friedrich Naumann Foundation at a ceremony in Paulskirche, Frankfurt am Main, on 8 November 2014; then from reflections that her son Paul wrote after Mila passed away.

I first met Mila and her husband Wolfgang in December 1981. I was then Helen’s new partner and understandably a bit nervous about how her parents were going to receive me, but my concerns evaporated from the moment I met them. We warmed to each other immediately and I felt I had arrived home. In truth they became like parents to me.

Mila and I quickly established a deep and meaningful relationship. We often talked about religious and spiritual matters. Mila was a deeply spiritual person. Although we did not share exactly the same beliefs, we shared the same values and we both believed in a transcendence beyond this life that encompasses a higher ethical order.

I also found that Mila had a deep self-awareness of her own weaknesses and limitations, but she had made peace with herself. She had accepted who she was and this brought a maturity and wisdom to her.

However, life was not all just one of meditation and reflection for Mila, but also of fun and laughter. When I got to know her she and Wolfgang belonged to a bowls club where they played regularly. Occasionally they would also go off to Sun City, for a weekend of gambling and other pleasures.

But how had Mila managed to reach the depth and spirituality that struck me so forcefully? Like Heinrich Heine, whose poetry she loved so much, she had, in part, a Jewish background, was a woman of faith, but never belonged to any faith community, was repelled by the politics of her own country, and battled to find an identity in exile.

As I said earlier, I found the key to answering this question in the acceptance speech that Helen Zille gave at the Freedom Award ceremony in Frankfurt Am Main on 8 November 2014 when Mila was still alive.

Here is quite a lengthy extract of the relevant parts of her speech, which Helen gave in German. This is the English translation:

“I am deeply honoured by this award, and very grateful that my mother, Mila, is still alive to witness this exceptional affirmation of my parents’ values. It was these values that made them outsiders in two countries: the country of their birth and later, their adopted country South Africa, under apartheid.

“Eighty two years ago, when my mother was 12, Hitler came to power.

“A young and sensitive, half Jewish teenager, her life changed as anti-Semitism developed from mere prejudice, to official policy entrenched in law.  She remembers being isolated, excluded from the activities of her peers, and barred from joining the tennis or the rowing club.   These early scars remain with her today, which gives you some idea of what this metaphoric embrace, by the beloved country of her birth, means to her now.

“I was interested to read in the memoirs of her father Carl Cosmann how he managed to get his five children, one by one, out of Germany, how he survived his arrest on Kristalnacht and narrowly avoided being trucked to Dachau and how he, his Protestant wife and their younger daughter, my mother Mila, finally made it to England, shortly before war broke out.

“The story that fascinated me most was about her internment on the Isle of Man, as an ‘enemy alien’.

“While preparing for this speech, I asked her to tell me the story again, so that I could capture it, in her own words.  This is what she said:  ‘Being interned was the first time that I was really happy in many years,’ she said.   ‘I was called Mila.  I did not have a label.  I was liked for who I was.  For the first time I met Germans who were not Jewish but who rejected nationalism, and wanted to associate with me and my family.  We did things together, especially working in the garden.  We laughed a lot, shared a lot, and I belonged.’

Now Mila’s son Paul picks up the story in reflections he wrote of his late mother. I quote:

“These experiences marked her for life. She emerged as a refugee in England, and later as a young midwife in SA, as a deeply shy, reserved young woman with little if any confidence or self-esteem.

“She understood this to be a major factor which drove her early life in SA, where she met and married our father Wolfgang, who understood and shared many of the experiences of her early childhood.

“And then, two years after arriving in SA, in 1948, the Nats were elected and the ideology of Christian Nationalism became entrenched. Out of this reality, she emerged as a fierce critic of apartheid – its ideology, its brutish application, its petty awfulness, its manifest cruelty and injustice. Her reaction and response to this environment shaped her children’s consciousness of what was happening in South Africa at the time.” End of quote.

Mila searched around for what she could do to fight apartheid and its destructive consequences. She found the answer in the Black Sash. She became a committed member and engaged actively in its work, its advice office and its silent protests against the evils of apartheid. The Black Sash thus provided her with a community of people who shared her values and commitment, and with whom she could fight against the entrenched racism imposed by the apartheid regime.