Diana Davis, one of the very earliest members of the Black Sash, has passed away in Cape Town after a long and energetic, as well as fun-filled life. She hosted the first Port Elizabeth meeting of the Black Sash in 1955, and remained active and interested in it there and in other places where she lived. 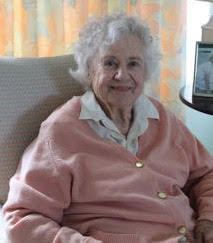 She was among those who travelled in the Black Sash convoy to Cape Town in 1956, sleeping outside parliament to protest against the National Party’s decision to change the Constitution in order to remove the coloured voters from the common voters roll.

Her friends and colleagues remember her, in Judy Chalmers' words, for her deep wisdom and humanity, her loyalty to her family and friends, her wonderful and unquenchable curiosity about people and the whole of life, her marvellous intelligence and her courage in adversity. Bobby Melunsky recounts Di's varied activities, including the establishment of a crèche in Walmer Township, named for her by residents and still going strong; her work for Kupugani and School Feeding Fund; her involvement in making parcels for detainees and banished person, and visiting them; and helping to establish the ABC book fund to provide school books for African schools.

When the Port Elizabeth Region of the Black Sash took a decision to close under severe repression and declining membership in the 1980s, she was one of those who sustained it as a P.E. branch of the Albany Region based in Grahamstown.

Every tribute to her is characterised by mention of her energy and positive outlook and inexhaustible zest. She was loved and admired, and will be greatly missed.