Rodney Davenport, noted historian, defender of civil rights, enthusiastic mountain walker, and one of the earliest and most supportive ‘associate members’ of the Black Sash, has died in Cape Town on 2 July 2016. 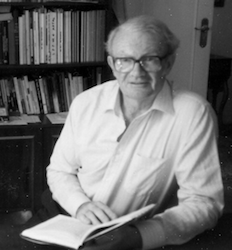 He came to South Africa during World War II as a schoolboy and went on to study at Rhodes University, Oxford and UCT.  He became professor of history at Rhodes and he and his wife Betty (a founder member of the Black Sash) were actively involved in the Grahamstown community.  Rodney was a city councillor, where his knowledge of the history of land tenure strengthened the successful campaign to save Fingo Village from being destroyed by apartheid’s forced removal plan.

His meticulous work on South Africa’s history led to the first publication in 1977 of his South Africa: A Modern History, which has been republished several times and used as an essential reference ever since.

When he retired and settled in Cape Town, he became a valuled member of the Civil Rights League committee.  The Black Sash pays tribute to a friend and colleague who has left a legacy of scholarship and commitment to upholding the rights of all people.