Ann Grayson, a campaigner for peace in Pietermaritzburg and one of its most active citizens, died suddenly last Friday at her retirement complex in Pretoria. 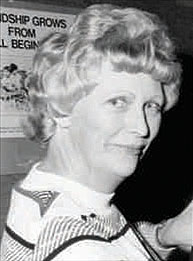 Grayson lived in Pietermaritzburg from 1975 to 2007, and only moved to Pretoria to be closer to her daughter, after her husband Dr Carl Grayson had died. She was fully involved in all aspects of the city's civic life, but her passion was for peace. Graysonwas chairperson ofthe organisation Women For Peaceful Change Now, which brought her into contact with women from different communities throughout the city. Her daughter Diane recalled that their house was often the venue for multiracial gatherings and meetings and this meant frequent visits to the street by the security police. "... And the crackle on the phone let us know that our calls were being tapped," she said.

The Graysons lived in the United States in the early 1970s and returned to South Africa in 1975. The family moved to Pietermaritzburg in 1976, a turbulent year, and, according to Diane, the beginning of her mother's involvement in social justice activities. It started innocuously enough with herjoining a Bible study group that deepened her awareness of injustice. Before long she had joined the Black Sash, the Institute of Race Relations and later the Pietermaritzburg Agency for Christian Social Awareness (Pacsa).
She took a training course on how to teach adults to read and was also involved in pre-school education.

Grayson was a founding member of Tree (Training Resources For Early Education) in Pietermaritzburg, which taught pre-school teachers how to make and use toys from everyday household items. "My father complained that the house was always full of "junk" for Tree toys — the inner cardboard tubes from toilet rolls and scraps of aluminium foil. The house also became full of blankets and clothes when she launched collections for the victims ofviolence around Maritzburg in the 1980s and 90s," said Diane.
Brendon Bell, director of the Tatham Art Gallery, said that Grayson served on the gallery's board from 1997 to 2003 and that she personally offered financial support to many struggling young artists and promoted community-based art initiatives. Bell remains grateful for Grayson's support and friendship. According to Diane, her mother loved amateur dramatics and organised many candlelight theatre and storytelling performances.

She was also a prolific writer of letters to the newspaper. "Local leaders knew that if they misbehaved they would be publicly castigated in one of her letters," Diane recalled.

Close friend and member of the provincial legislature Mark Steele said that Grayson represented the NGO sector within the Pietermaritzburg Transitional Council (TLC), which negotiated the transition to a democratic local government after 1996. "She made a significant if largely unrecorded contribution to the new Msunduzi Municipality," Steele said.

He said: "Grayson had a dominating personality, which probably came across as domineering to more diplomatic souls. One had to be able to stand up to her to win her respect and she relished sharp and controversial arguments."

While Grayson served humanity, animals featured as an extension of her concern. She and her husband were ardent dog lovers and anti-animal cruelty supporters. The SPCAs Maureen Vida said both Grayson and her husband would send off letters and campaign on animal rights issues. "When Ann left for Pretoria she gave me a folder of letters and articles on animal rights issues and the information is still being used by our education officer today," said Vida.