Patricia Denniston, known as Trish or Tricia, was a leading member of the Black Sash in Elgin (Western Cape) and a woman who had a powerful influence on many lives.  We have recently learned of her death in Canada in December, and extend our condolences to her family and friends. 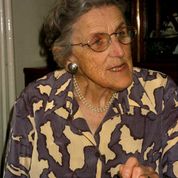 Together with her sister Anne Browne, she lived at the Denniston family home, Ridgelands, to which they moved from Natal in the 1930s.  They also spent holidays at their beautiful house, Water’s Edge, in Simonstown, where Anne Browne lives today.

Ridgelands was Tricia’s home for much of her life until she married and settled in Canada.

She was a devout Christian and for a time was involved in mission work and in particular that of the Jane Furze mission in what was then Sekukuneland (now Limpopo). She stayed and worked there for long periods at a time.

Back in the Cape she was involved in much Christian fellowship and in Elgin she was, for many years, the backbone of St Michael and All Angels’ Sunday School.

Tricia and Anne were part of a small but brave and dedicated Black Sash branch which participated in many protest demonstrations, and also took up local issues. Part of Tricia’s dedicated service to the community at Elgin Orchards and the surrounding farms was helping to establish a primary school and a pre-school at Oudebrug.

For many years the branch would contribute to the Black Sash’s fundraising efforts by hosting an annual picnic during the apple harvest season.  Convoys of town members would travel out to Elgin for the day, and return laden with farm produce, baked and preserved delicacies, having spent a day walking, swimming, and enjoying the beauty of the orchards.

In the 1960s, as the Group Areas Act and the pass laws were applied with ruthless determination by the apartheid state, Tricia and the other Elgin members stood up for the human rights of the residents of Newtown, the settlement that was built by African migrant families above Grabouw.

Their battles on behalf of the Newtown residents were fought with great tenacity and courage – at one time Tricia is known to have lain down, in the pouring rain, in front of a bulldozer that was about to start demolishing people’s houses.

Newtown was eventually cleared and its residents banished to the Eastern Cape resettlement camps at Sada, Dimbaza and Witsieshoek, and Tricia (and other Elgin friends) continued to support the resettled Newtown families for many years.  (Many of those people were seasonal workers, and their plight is an echo of the experience of the workers in De Doorns and other areas in recent months.)

Tricia did not hesitate to take on the local authorities, and the story is told that the ‘Bantu Affairs Commissioner’ of the time, Mr Breunisson, who in fact came to respect her for her unbending resolve and witness, on learning that she was emigrating to Canada said, “My, Miss Denniston, the ESKIMOS have found a FRIEND!”

She was a gifted artist, and in Canada she continued to paint portraits and landscapes and her much-loved horses.

Tricia Denniston was a valued and respected member of the Black Sash, and we honour her memory.