Helen Kotze, quietly courageous opponent of apartheid and injustice, staunch member of the Black Sash and the Christian Institute (CI), died on 21 January 2013 at the age of 92. A memorial service will be held on Thursday 7 February at the Roseband Methodist Church at 2.30 pm. 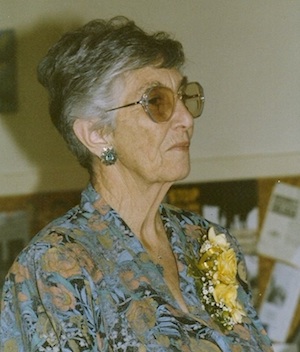 Wife of the Rev. Theo Kotze, mother of five children, she was steadfast in her support of all of them, and stood with Theo against all the threats and attacks on him and the CI, eventually following him into exile.

The Christian Institute opened its offices in Mowbray in 1969, opposite the railway station. At that time the Black Sash Advice Office was in Sybrand Park, where it remained until a petrol bomb was hurled into its premises. Not surprisingly, the lease was terminated since there had been previous attacks on the office. The Christian Institute offered space in its building, and the Advice Office remained there until the terrible day of 19 October 1977 when the CI was banned, along with many other organisations.

Helen and Theo left so much that they loved behind them, and met many difficulties in their enforced new lives, first in Holland and then in England. They continued to work for the anti-apartheid cause, and Helen was known for her calm and gentle personality, offering a welcome to others and comfort and help to Theo.

They returned to a newly liberated country for which they had sacrificed so much. Helen took up the threads of her life once more, renewed the friendships she had valued, many of them with other members of the Black Sash. When the Order of the Baobab was awarded posthumously to Theo in 2008, Helen was proud and delighted. It was generally believed that she had contributed to his achievements in no small measure.

She will be remembered for her commitment and her grace. 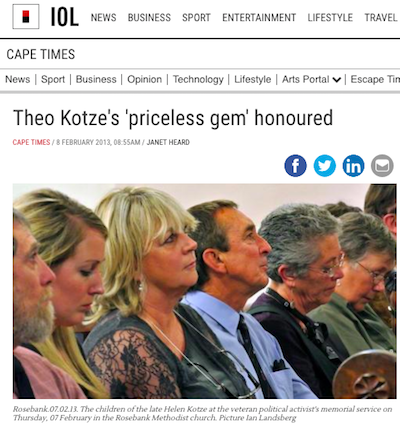 Hundreds of mourners paid tribute this week to “Theo’s priceless gem” at a memorial service for Helen Kotze, who was honoured for her behind-the-scenes fight against apartheid.

Addressing a packed Rosebank Methodist Church on Thursday afternoon, the family’s close friend and fellow theologian activist Charles Villa-Vicencio described Theo as the “committed opstoker” and Helen as the “rock” who was the “mother of the Christian Institute” in Cape Town, a stalwart of the Black Sash and a “champion of the poor”.

Together, the couple, who had five children, were a “formidable pair who paid “an enormous price” in the fight against apartheid.

As activists at the Christian Institute in Mowbray, their home was searched and shot at by security police. In 1977 the Institute and Theo were banned, leaving him with no choice but to cross the border into Botswana. Helen and her family followed, embarking on a new journey into exile “beginning to pay the price in a new way – the loneliness of exile”.

After 15 years of being uprooted, the couple returned to South Africa in 1993 – at the dawn of the new SA.

The couple’s son Derek told the friends at the service that his mother’s life “could not be described as a happy one, but it was a rich one”.

Another close family friend and activist, Horst Kleinschmidt said that in the liberated SA, Helen’s values remained what they were before 1994, a life in search of ‘justice and honesty”.

“The struggle left them with no house of their own and every cent had to be turned twice before it was spent. They never complained nor had regrets,” said Kleinschmidt.

The story of the Kotzes and of the Christian Institute had not yet found its place in South African history, and it “deserves remembering”, he said.

The Institute and the Mowbray office was a place of education, where a “small and beleaguered community of apartheid opponents” of all races gathered, where they set an example in living an alternative life to apartheid.

Kleinschmidt said that like so many others, Helen had been forgotten for her freedom-fighting role after liberation in 1994.

This was why in her Diep River retirement home, Helen was very proud of the National Orders award, the order of Luthuli, that Theo was given posthumously by the president in 2009 for his contribution to democracy. - This email address is being protected from spambots. You need JavaScript enabled to view it.