Friends urged to celebrate a life lived fully with her infectious love of life and her championing of traditional Zulu pottery, Pietermaritzburg ceramicist, Juliet Armstrong, made the world a better place. Following a battle with cancer, Armstrong, a professor at the University of KwaZulu-Natal's Centre for Visual Art, died on Wednesday. She leaves her husband Mike, daughter Jessica, son Tom and stepson, Brendan. 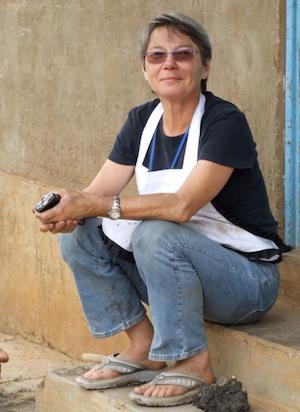 In a note to friends and family, Mike said: "She would require you at the earliest opportunity to cook your favourite food, get out your best wine, listen to some music (opera, Abdullah Ibrahim, Sibongile Khumalo, The Fureys, classics, whatever) and celebrate a life lived fully and lived well. As I said to her, she made the world around her a better place."

Armstrong obtained her BA Fine Arts degree at the then University of Natal in 1972, before heading to England for two years to attend Leicester University, where she studied glassblowing and industrial ceramics. She later worked as a governess in Stuttgart, Germany, for the famous Porsche family and travelled across America before returning to South Africa and her alma mater, where she did her masters degree thesis on the well-known British ceramic artist, William de Morgan. Best known for her exquisite porcelain sculptures, several of which can be found in the Tatham Art Gallery in Pietermaritzburg, Armstrong also tried her hand at pencil drawings, wood carvings and photography.

During her years at UKZN, she did extensive research into the use of bone china as a sculpture medium. She developed a method of deflocculating the porcelain to cut down the percentage of water in the body, to create an exceptionally white, hard and translucent medium. As one of the artists in the All Fired Up exhibition, which took place in March and April 2012 at the Durban Art Gallery, Armstrong said she wanted to show that clay could be used in different ways and that it did not have to look perfect. One of her works from the exhibition has been acquired by the Tatham for its permanent collection. Titled Ridge Dog, it is partly original work, part found object. The dog's body was discovered by Armstrong when she was digging in her Scottsville garden, and she added a head and limbs to it, creating something unique.

This work, along with others made by Armstrong, have been installed in a special tribute display in the ceramics room at the Pietermaritzburg gallery. Armstrong and fellow academic, Professor Ian Calder, also helped raise the profile of Zulu pottery through a research project, which began in 1993 and involved them collecting pots, and meeting and working with potters like the celebrated Magwaza sisters from Mpbalane near Kranskop and the Nala family from the Oyaya area. In a tribute to her, Brendan Bell, director of the Tatham said: "She will be a huge loss to ceramics in this country ... when you look at our collection; so many pieces in it are connected to her through her work and her teaching ... her spirit wanders through our collection." It is no doubt also wanders through the corridors of UKZN.

Armstrong's colleague at the university, Faye Spencer, said the staff and students were feeling devastated. "Juliet was the warm heart at the centre of so many significant aspects of our practice: her involvement with rural potters, her interest and research on pottery and indigenous crafts, her compassionate mentoring of her students, herwise and wry counsel for new academics like myself ... we feel so sad because we feel the loss of all these things," she added. "I know UKZN has been lucky to have her for 30 or so years, and the mark she has left on this place is somethingindelible andwonderful."

Another friend of long standing and a comrade in the Black Sash, Mary Kleinenberg, said Armstrong's compassion for others would be sorely missed. She volunteered at the Black Sash's advice office in Pietermaritzburg, from the time it opened in 1975, offering help and advice and taking on various roles, including that of treasurer. "

Juliet had a huge sense of justice. She really cared for people who were battling; as evidenced by all the people she supported in the arts community," Kleinenberg said.