With a heavy heart I must share with you the very sad news that our colleague, David Ngxale, who worked at the Black Sash Knysna Office for 24 years (one year as a volunteer) died tragically in a car accident this weekend. 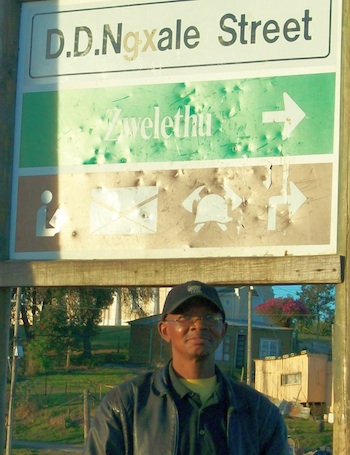 David dedicated his life to social justice work in and around Knysna and was held in high esteem by members of the community. He has the distinction of having a street named after him, as you will see in the photograph attached, shared this morning by Elroy Paulus who says that it was "taken in August 2009 high up on the hillside above Knysna called “Jood se kamp”, when he and I worked with the local community on the IDP of Knysna municipality."

We think especially of those of you who worked closely with David over many years, and of his family, friends and community. We hope for us all the space to grieve and the strength to take forward his legacy.

Thank you for your fitting tribute to dear David Ngxale. What a tragedy that he should have lost his life in a car accident.

Elroy's fine photograph of David in front of the street named after him is wonderful. I didn't know about this honour having been given to him, but it is more than appropriate. David is a hero, not only of struggle in Knysna and more broadly in the southern Cape, but one of those unsung national heroes who selflessly dedicated his life to the cause of others and working for good.

It was my privilege to meet and work with David long before the Knysna Advice Office was established. He attended training workshops run jointly by the Advice Office Forum (in which Marcella played a leading role) and the Cape Town office of the Black Sash. He was one of the fearless activists who worked with the Knysna members of the Black Sash to bring justice to the people "on the hillside" in "Jood se kamp". His enthusiastic nature and commitment to justice were palpable in those early days.

My deepest sympathy to all who worked with David, to his family and his many friends.

May his soul rest in peace. 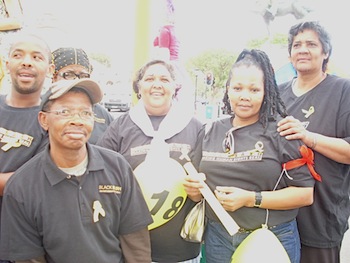 I have personally known David Ngxale for a very long time. The passing of David has shocked me personally. I have known David or ‘bra David’ as a humble and principled person who was strong on civic politics. David sharpened his political and civic activism within SANCO’s grassroots structures and was a staunch ANC member. I have never known David to be an ostentatious person.

A couple of years ago, I accommodated David at my house and we talked and talked about life, family, politics, tradition, culture, custom, sport, etc. I was so impressed with his way of thinking and never doubted his intellect. I also remember visiting David in his own backyard. David introduced me to friends, neighbours and others... I immediately observed that David was respected and he respected others and was never treated as a Messiah. Equally, within the collective organisational spirit, David popularised the Black Sash in and outside the Knysna area.

With these few words, I am already missing him.

Tribute by XC May, former Black Sash colleague and Vice Chairperson of the Correctional Service of Parole Board

David Dabula Manzi Ngxale was born in Knysna, staunch son late Beauty and Rhoqololo Ngxale. He attended high school in the Eastern Cape. Due to political pressure, David joined politics at an early age, and all his life he was surrounded by politics.

He joined the Black Sash in 1987 and dedicated almost all his life working tirelessly for the recognition of Human Rights and access to justice for the poor. He continued for period of 24 years providing free legal advice to the poor and indigent people on behalf of the Black Sash.

He participated in the process of the Truth and Reconciliation Commission and encouraged all the victims in the Southern Cape to come forward and disclose all the atrocities which were committed against them by the former repressive regime. At the Black Sash, David spent all his time giving advice, and conducting information sessions on the Labour Relations, etc. He had a comprehensive understanding of the Labour Laws and was very much abreast of the recent amendments. He was fair in his dealings and as he would not separate the employer in the process, most of his cases were  resolved internally.

This legend has fought in trenches and he was amongst the other lobbying groups who compelled the Department of Justice and Constitutional Development to implement the Domestic Violence Act 116 of 1998 for the protection of women and children from the perpetrators of violence which mainly occurs at homes.  He also participated in the process of submissions for the appointment of maintenance investigators in terms of the Maintenance Act.

He established a sold professional networking relationship with the local stakeholders, state departments, government agencies. Amongst others we can count the following: SASSA, DOSD, CCMA, and Department of Labour. If something went wrong he would not hesitate to contact the heads of those institutions to report and even make the recommendations on how to handle such a problem and he would use the the Promotion of Administrative Act (PAJA) when it was necessary to do so. When he spoke about the importance of this piece of legislation to us in the office he said, "If a Paralegal Advisor fully knows and understands the provisions of this Act as well as when to use it, he is like a soldier who carries a AK 47 in the battle field." He viewed the Act as one of those empowering pieces of legislation to equip the Advice Office workers to make sure that the rights for the poor and indigent have been realised and recognized by the state or government departments. It was one of those pieces of legislation which he lobbied for.

He assisted the Black Sash to run a Satellite Office in Plettenberg Bay and aim and objective was to bring the Black Sash services nearer to Plettenberg Bay citizens. The first partnership was between the Black Sash and St Monica Anglican Church through Reverend Booi and it worked as follows: David provided the advice on behalf of Black Sash while the Church provided Soup Kitchen services to the clients who came for advice. The Office moved to the NG Kerk and later to the ANC Constituent Office until the closure of the Black Sash in Knysna in 2011.

David decided to take his take his retrenchment package in December, 2011 due to the rationalisation of the Black Sash. He argued that he could not leave his people and work in Cape Town while his people’s needs still remain unsatisfied.  This is not an isolated incident as he always put the interests of his people first and his own last. The Community of Knysna at large was honored to have a person of his calibre; all of us who worked with him were well privileged to be associated with him; and his family (wife, sons and daughters, nephews, brothers and sisters) blessed to have this stalwart.

David was involved in a car accident at the Cracks on 19 October 2012 as he was driving from Port Elizabeth to Knysna. He had run the race, fought the battle, and he deserves to rest. May his soul and his spirit of patriotism rest in peace.

He is survived by his wife Nomsilakhe Ngxale, his beloved two daughters , Vuyokazi and Anelisa and his two sons Ayanda and Malele, his brothers and sisters  and many more extended family members from the huge Ngxale family from all the provinces.

I wish to send my deepest sympathy to the family of David Ngxale, and to all who were his colleagues and friends. He served his community as well as the Black Sash with courage and dedication for many, many years, and will be greatly missed. It is a dreadful shock to lose someone so suddenly, and to have to endure his loss.

Those of us who had the opportunity to know him and encounter his work in the Knysna area will remember him with warmth and admiration. I hope his family and all of you who were together in the Sash office will find comfort in the knowledge that he has been so widely regarded, and will not be forgotten.