Tenacious human rights activist and extraordinary human being Dorothy 'Dot' Cleminshaw passed away peacefully in Cape Town on Sunday, the 18th of December after a long illness. She was 89 years old. Her children, Martin and Karen, were with her when she died and they say that she looked more at peace than they could ever recall seeing her in life.

Dot's memorial service will be held in St Georges Cathedral on Thursday, 29 December, from 10 to 11.30. 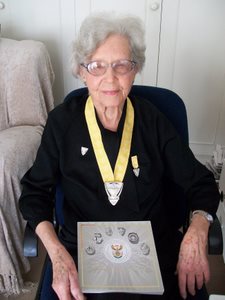 Dot exemplified a life well lived in the service of others and in the defence of principles of justice and honesty. To trace the events of her life, is to record the history of individuals of courage and of movements which, although they may have seemed powerless, were able to uphold the values of true democracy and the rule of law even through periods in South African history when they were most under threat.

She joined the Black Sash in 1963 and participated in a number of campaigns and was a strong advocate for human rights. She devoted particular time and energy towards efforts to reform the country’s legislation on abortion, a cause which was not always popular or comfortable even among those with whom she had often worked on other issues. Together with a small band of other activists, she made a significant difference to public opinion and awareness, and contributed towards improvements in the law.

Read the full citation made by Mary Burton when Dorothy was presented with a Master of Social Sciences, honoris causa, by UCT in June 2002.

A tribute from Horst Kleinschmidt to some of Dot's "Neighbours" in the South Peninsula - and also published in the Falso Bay Echo.

It is with sadness that I inform you of the passing, yesterday afternoon, of Dot Cleminshaw. A spinal injury caused her to be in constant pain for many years. When she was in need of further care she moved in with her son Martin and his wife Karen, near here at Marina da Gama. Despite her health she remained an avid writer to the press, ever reminding those in power what their civic duties are or what the nature of their transgressions is. Her credibility was built on her simple lifestyle, never seeking accolades or status. She stands out in the South African landscape as a fearless and independent fighter who stood strong against apartheid but did not hesitate to criticise the new order when needed. Her anti-racist stand serves as a beacon toward the much needed reconciliation in our country. For her service to South Africa she was awarded the Order of Luthuli by President Zuma in 2010.

I visited her several months ago to bring her the good wishes of a gathering of some ‘neighbours’ at Sunny Cove Manor in Fish Hoek. Ever meticulous, when I asked her about events in her youth and what got her to take an unpopular stand in the white community, she explained and afterwards I got an email about a detail she had forgotten. What she wrote was: My husband and I were also teachers for the Cape Night Schools Association at St. Philips, Woodstock, for a short while, at the request of Harry Brodie, of the Liberal Party, who chaired the association for a time, It was closed down eventually by the government. I think it was initiated by that fine communist, Eddie Roux, a professor of botany at UCT and Wits, who later joined the Liberal Party.She and the letters and articles she wrote make South Africa a poorer place. She is a most worthy neighbour we may all take a moment to remember.