“We are for Peace and Human Dignity” are the words on a poster pictured on the front cover of a booklet edited by Margaret Nash, the 1985 annual conference report of the South African Council of churches. Indeed those words reflect the goals towards which she strove all her life. This remarkable Capetonian has passed away quietly in St. Luke’s hospice, after a long illness, patiently and bravely borne. 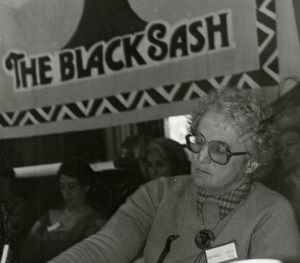 Her intelligence and her sometimes combative nature covered a heart that felt deeply the suffering of all those who lived under injustice and deprivation. Through her writing and her involvement in ecumenical work, in social activism and in political commitment, she made her mark.

In the 1970s she studied at the University of Cape Town under the late Professor John Cumpsty, and her doctoral thesis, The Ecumenical Movement in the 1960s, was published by Ravan Press (Johannesburg) in 1975. Peter Moll has said of it that it had helped others understand the mission of the church in a broad context, international and ecumenical, rooted in justice.

She was closely involved with the Christian Institute from the time she joined in July 1969, and was much influenced by the Rev Theo Kotze who, together with his wife Helen, became close friends.  She said “Theo pushed me to become involved”, but it seems that she did not need much pushing.  She often felt frustrated by the lack of action by many churches in the face of injustice, and the work of the Christian Institute provided a welcome home for her energies. It expressed what she believed in and she enjoyed the mutual support and companionship at the CI.

She was active on the Anglican Board of Social Responsibility for many years, finding here too a vehicle for her commitment to the Anglican church to which she belonged.  At her local parish level she promoted a number of projects at St Saviour’s Church in Claremont.

Although she herself never sought ordination, she was regarded as a heroine of the church world.  In the context of a patriarchal church hierarchy, she was an inspiration to  other women  who were subsequently ordained priests.  One of her admirers has described her life as a role model of female discipleship.

Born in England at Milford-on–Sea, on 1 March 1929, she was the second of three children.  Her sister Dr Eleanor Nash, a psychiatrist retired from Groote Schuur Hospital, lives in Claremont. The  family immigrated to Durban in January 1931 where their son, Herbert was born. The parents have long since died. Herbert Nash, a well known nursery man, died recently. Margaret entered Rhodes University in March 1945 at the age of  just 16.

Margaret joined the Liberal Party of South Africa in Durban in 1960.

She was an active member of the Black Sash in its Claremont Branch, and served on its Cape Western Regional Council and later on its National Executive. Her articles, letters and statements were known for their forcefulness and clarity. A member recalls how she was drawn by Margaret into some of the work:

I think it was called the Township Liason Project and was headed by Dot Cleminshaw, Candy Malherbe and Margaret Nash, with Paddy Walker and I as hangers on.  It was thanks to Margaret that I first visited an African Township when she took me to a meeting at the Holy Cross Anglican Church Hall in Nyanga (in 1986 I think) where I remember with warmth meeting a charming elderly man with beautiful manners and good English – he reminded me of my father, and how alike  we all are, and was the start of my great pleasure and interest in going into the Townships when there was something (hopefully) useful to be done in the years following.

I know that Margaret had a wide circle of friends, of all race groups. She once told me she had never been paid a salary for any of the jobs she had undertaken, though presumably been recompensed for expenses. She also that she did a great job of work for churches in Europe, specifically in Germany and England, where she was a trusted reporter on political affairs in South Africa to churches there during the worst of the apartheid era.