Eulalie Stott, Black Sash anti-apartheid activist and champion of housing for the poor, has died at her home in Claremont at the age of 87.
A founder member of the Liberal Party and of the Black Sash, she became a leading campaigner for the abolition of the pass laws and an outspoken, fearless opponent of the apartheid tyranny.

A tribute by Candy Malherbe 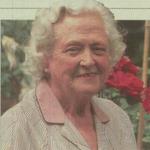 An incident for which I will always honour Eulalie was her brave and impulsive action, as councillor dedicated to housing, on behalf of a desperate community on Klipper Road, Grassy Park. Many will remember how she loaded them onto a bus and went with them to the Dutch Reformed Church in Rondebosch - the church of many who were prominent in the then government. It was Sunday, and they arrived in time to lay their situation before the congregation as it filed out after the morning service. The story was in the Monday papers, and it seemed as if Eulalie would pay dearly for her initiative. The politicians retaliated by invoking the Riotous Assemblies Act. If, as organiser of a riotous assembly, she was found guilty of a criminal offence, she could be barred from the City Council. At some point - I forget the details - the charge was dropped: comfort zones had been disturbed, but there had been no riot. Eulalie survived, to give many more years to the city.