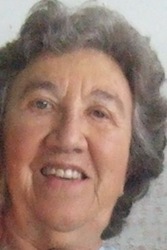 A memorial service was held for her on Saturday 31 January 2009 at 14h00 at the Allenwood Club, Helderberg Village, Somerset West where she lived during her retirement.

"Louise was a teacher - a wonderful teacher! During the apartheid years she taught Afrikaans (Louise was Afrikaans-speaking;  a cousin of the late Beyers Naude) really imaginatively!  She used to clip the leaders from the Cape Times and have her pupils (learners today!) translate these into Afrikaans."
There could be no come-back from the Department because there was an agreement between the Cape Times and Die Burger that they would publish each other's leaders every day.  There was a difference, however, as to how this was done - the Cape Times translated Die Burger's leader into English, but Die Burger published the Cape Times' leader in English.
Louise was a vociferous opponent of apartheid and suffered for her outspokenness.  Her beloved son, Edwin was an activist who was detained for long periods and then lived in exile in Zimbabwe.  Louise struggled with the immense anguish families had to deal with because of the vicious detention laws of the time and the uncertainty of not knowing how long a detention would last and the pain of separation when Edwin went into exile.
She is survived by Edwin and Theresa, a well-known social worker of whom she was very proud.  Louise was a devoted grandmother of Theresa's wonderful children.
Copyright © 2017 Black Sash - Making Human Rights Real
Tel: +27 21 686 6952 Fax: +27 21 686 6971
Email: This email address is being protected from spambots. You need JavaScript enabled to view it.