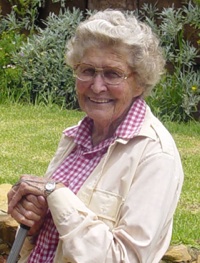 There was a very good turn out of past Sash members at a service to celebrate Jessie's life in Rondebosch, Cape Town on Saturday, the 13th of October 2008.
Peggy Corbett, a life-long friend of Jessie's gave one of the tributes, having been asked to especially mention Jessie's Black Sash work.  She made a point of saying how regular chats and exchanges of news when the two of them were seeing their children safely across the rugby field to school had contributed to their getting to know each other. 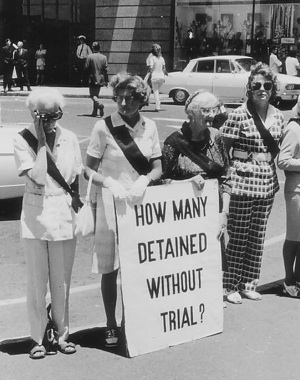 She added that "aspects of Jessie's life were remarkable but her passion for her horse and riding were especially remarkable. I admired her greatly for her determination to achieve her ambition to ride from Cape Town to her home farm (near Beaufort West in the Karoo!), which I think she did twice.  Apart from many other interests was her very loyal involvement with the Black Sash.  I don't think any public demonstration took place without her participation - standing on pavements holding a placard and wearing a sash."
Beva Runciman, who was also present at the service, said she had the joy of getting to know Jessie when she visited her horse which she kept near Beva's home in Zeekoeivlei. Beva said she too cannot remember that Jessie ever missed a protest stand. She was also especially helpful and supportive in getting the placard distributed to the various Peninsula branches of the Black Sash because Jessie had a bakkie.
Noel Robb confirmed what many had said in tribute to Jessie - that she was essentially a practical person; not spending too much time in meetings, but getting on with the work that needed to be done, especially contributing to organising and making the sash protests happen.
Copyright © 2017 Black Sash - Making Human Rights Real
Tel: +27 21 686 6952 Fax: +27 21 686 6971
Email: This email address is being protected from spambots. You need JavaScript enabled to view it.