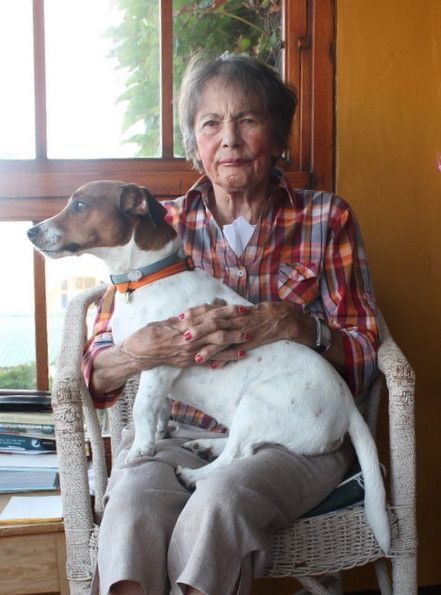 Peggy North was widely known as a talented artist.  She was also well known, respected and loved for her way of being in her immediate community, and for her work for social justice in and beyond that community. Those who knew her well delighted in her capacity for joy which she shared through her art and her life. She will be sorely missed by all whose lives she touched. 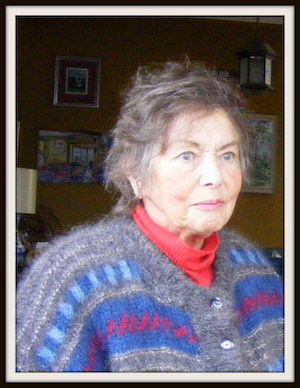 The pages of Peggy’s 1989 Black Sash calendar reveal her constant engagement with home, neighbourhood community, issues of social justice, and art. The entries for one month, chosen at random, include a Black Sash General Meeting and a National Report-back Meeting, three Black Sash protest stands, medical appointments for family members, cooking for Daily Bread (a meal project at the local Anglican Church), doing flowers in the church, having lunch with friends, and teaching a class at the Children’s Art Centre. Over many decades, her sessions of painting, drawing, and ceramics (which are not even marked on this calendar), produced an extraordinary body of work. It includes seascapes and landscapes in water colours and oils, for which she is justly renowned.

Peggy started painting as a young child and it remained a passion throughout her life. She studied art at the University of Cape Town’s Michaelis School of Fine Art, and continued her studies at Edinburgh University. While in Europe, she travelled widely, often on a bicycle, revelling in what she encountered, and painting all the while. When her money ran out she returned to South Africa and taught art in schools for a while. She married Immel Botha and they had two sons.  In 1970 they came to live in Kalk Bay in a house in Ladan Road, behind the flats of the fishing community.  It was ramshackle and neglected and she loved to tell the story of her first meeting with a neighbour from those flats. The day they moved in, Immel was out and Peggy, surveying the depressing state of the rooms, burst into tears.  After a while there was a knock at the door. A concerned neighbour from the flats, hearing the sobbing, had come to comfort her and offer help and encouragement. That was Peggy’s introduction to what she came to regard as a very special community, where she soon found a place.

Within three years of arriving, Peggy and some friends had set up a community art centre, where they gave classes to adults and children. It came to be known as “The Peggy North Art Centre”.  Its classes included batik, pottery, and painting.  A small fee was paid by those who could afford it, and it was waived for those who could not.

In the mid-1970s, The Water Colour Gallery was established in Kalk Bay by Peggy and a group of six other water colourists. The Gallery was run as a collective, a mode of working in which Peggy was very comfortable.

Prior to the opening of an exhibition of her own work in 1981, Peggy gave interviews to Yazeed Fakir and Dale Lautenbach.  In both she spoke movingly about how her perception of Kalk Bay shifted. To Dale she said:

When I came to Kalk Bay to live I experienced it as an artist’s paradise.  The atmosphere was intriguing. Slowly, however, something else emerged, something far more important. I started to see it as a mixed community in the true sense of the word and it is this perception that has influenced my work ever since.

She went on to give a practical example of characteristic give-and-take: “We work together in so many ways.  I’m donating the proceeds of a painting to the church and the nursery and, in return, the women will prepare food for the exhibition opening.”

Her experience of community was extended through her membership of Holy Trinity, the local Anglican church. A newspaper article “Peggy North by Peggy North”[iv] gives her account of this:

I have been involved in teaching the local children art on and off over the years – and my contribution to any fund-raising, e.g. for the local crèche, church or schools is always a painting which is “raffled” for funds.  Once a year at the Fish and Fun Fair (which is held on the harbour to raise money for the local Toddlers’ Club), I sit under a sun umbrella and do portrait sketches for donations – however much people can afford to pay.

Although she exhibited in Galleries over several decades and received very positive recognition for her work, Peggy was not “precious” about where and for what price her paintings could be sold, and she would even accept suggestions about subject matter, as we see in this story. One day she was sitting in the open doing a painting which she intended to donate to the Black Sash Morning Market. It was a seascape, seen from above the cemetery in Quarterdeck Road. When rain started, children, who had stopped to watch her paint rushed home to fetch umbrellas and a coat for her.  Just then a fishing boat returned to Kalk Bay harbour and they insisted she include it in the painting.  And she did.

Peggy loved painting out of doors. In an interview, she said that working outside “… is an incredible experience; one becomes completely absorbed with the colours and sounds of land”. She often painted within the village, but also on the mountains behind it, in other parts of the peninsula and further afield.

When talking about her Kalk Bay paintings, she said, “It’s the dignity of the people I’ve tried to capture in my work.  The peace and joy of the place, the sense of belonging and the pride”. She was, of course,  strongly aware that the peace and belonging were under threat in Kalk Bay. In 1967 it had been declared a white group area. A temporary dispensation was soon granted, to allow the coloured members of the fishing community who lived in the Council Flats to remain for 15 years. However, many of those who lived in other rented accommodation or in their own houses were forced to relocate in spite of protests by those affected, other Kalk Bay residents and the Black Sash.

In the mid-1970s, through Bosky and Paul Andrew, Peggy met John Moyle. They married in 1978. With their two sets of children, they lived in the Ladan Road house which John, an architect and practical builder, altered to accommodate the extended family and the studio.  John was always very supportive of Peggy’s art, her involvement in local community projects and in the work of the Black Sash.  During the 1980s they made their home a safe house for members of banned organisations who were on the run from the security police. 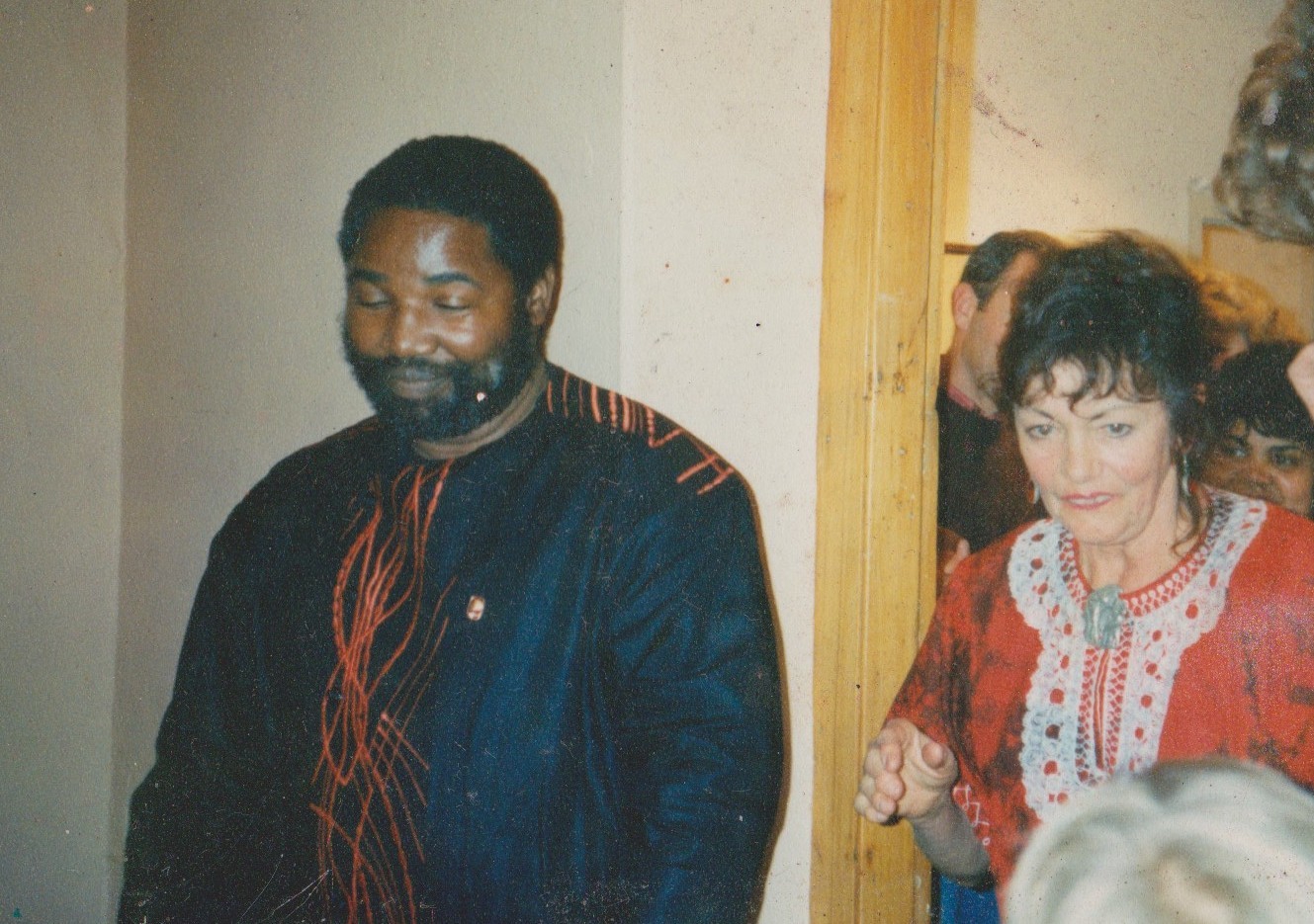 The social fabric of Cape Town was ravaged. The 1970s and 1980s saw many terrible instances of forced removals, and of people having to flee violence between political factions in their areas. With other members of the church and neighbourhood, Peggy worked to help the many women and children from Nyanga who were given shelter in the church and local homes, when they fled their homes to escape the violence instigated in late 1984 by the notorious “Witdoeke”. In 1987, as a member of the Black Sash, she was involved in a series of battles by people who had been forced off land in Noordhoek where they had lived and worked for generations.[ix] They became squatters in the area and fought for the  legal right to remain and not be evicted and sent to a distant, unfamiliar area. At first they were unsuccessful. On the day of the evictions, no press and no cameras were allowed.  So, the following day, Peggy went to the now desolate area and did a painting to record the devastation and evoke the pain of those who had been forced to leave. The next day she went to the new site to see how people were coping, and to capture something of their experience there.  She painted a picture of the community’s first “shop”, opened by one of the displaced people. “All the owner had to sell,” she said, “was three cabbages.”[x] Five years later, when this community had been given the right to settle in newly established Masiphumelele, she visited them again to join in their celebration. Her painting of the celebration reflects the sense of victory, and the energy they could draw on to make a new beginning – ‘masiphumelele’ means ‘let us succeed’.

In an interview with Claudia Cavanagh in 1995 she reflected on that decade:

The plight of the squatters moved me so deeply and affected my life so much that, for a long time, I was unable to paint at all. Now I have given up all community work and will devote the rest of my life to my painting.

But that division did not persist, as her activities over the next three decades testify.

With a group of other Kalk Bay residents, Peggy became involved in establishing a series of interrelated community projects, starting in 1990. The first was a sustainable recycling project which generated enough income to pay a local resident to run it. The rest of the income from recycling went to the running of the second project, The Haven Night Shelter for homeless people which opened in 1994. Their plight had been a particular concern for Peggy: “I said we should also do something about people sleeping on the streets. You would see them huddled in doorways in midwinter.  Some of them were old fishermen who were too old to go to sea and had nowhere to live”, she told Melanie Gosling in an interview in 2001. The third project was a Daytime Centre for homeless and unemployed people. It opened in 1999.  Linked to the Night Shelter, it was housed in two containers donated by Safmarine. At the Daytime Centre, volunteers offered training in various skills such as bag making, screen printing, mosaics and painting. Participants could sell what they made in the Centre’s little shop or at the exhibitions that were mounted there.  They could keep two thirds of the income generated while the rest went to the Skills Centre, where Peggy taught painting. Her classes were very popular and made a lasting difference to participants. One of these was Mambela Jacobs. She and her husband, a retired fisherman, were among the first homeless people to find a place at the Night Shelter. She had never painted before joining Peggy’s class but soon became completely absorbed, developing a distinctive style.  Peggy regarded her as very talented. Lynette van der Westhuizen, joint supervisor of the Night Shelter, referred to this absorption in an interview with Michelle Saffer: “Sometimes she’s still painting late at night.  We have to say ‘Mambela, that’s enough now. Go to bed!’ ”

Speaking to Philippa Taylor in late 1997, she said “I think back on that time [the 1980s] as my struggle years, and my work reflected how I was feeling.  Now, I see light at the end of the tunnel and am so happy to be able to paint with joy.” And she did.

The last public event in Peggy’s long history of political activism took place on April 10th, 2017.  Fittingly, it was on the Main Road in Kalk Bay. Both well into their eighties, she and John took part in a massive protest against State Capture.  This was a noisy restless protest, very different to the silent stands of the Black Sash. Their participation was motivated by their enduring sense of duty to call power to account.

When people start to reminisce about Peggy, there is always laughter, as each anecdote triggers others. From youth to old age, Peggy flouted restrictive conventions. She was quirky, adventurous, compassionate, funny, with a great sense of style. She touched many lives and she will be remembered with warmth and love.