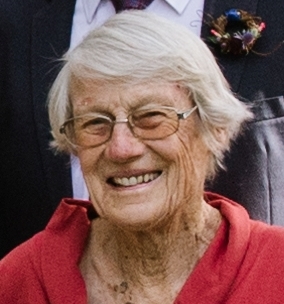 I first met Mary soon after we built a house in Everton in KwaZulu-Natal and moved there in 1968. I think it was at a supper meeting at Percy and Doreen Patrick's in Hillcrest; it was a Black Sash meeting at which Alan Paton spoke.

Mary joined Black Sash in 1961. She was loved and respected in Black Sash and was an active member. She could always be relied upon to support the protest stands – not something everyone was prepared to do. Her calm and wise contribution as a committee member and often as a representative to conferences was a valuable asset to Sash. She was much involved in the 1960s protesting at the removals of people from their traditional homes and livelihoods to places like Limehill.

From the 1960s, Mary was a member of the Advisory Committee at The Valley Trust (VT), a socio-medical project that operated in the Valley of 1000 Hills. The VT took a holistic approach to health in the community. There were three doctors on the staff, the causes of malnutrition were a primary concern, from poverty, ignorance, alcoholism or other causes. All of these were addressed. Other problems such as growing vegetables in the difficult, dry conditions in the Valley, were tackled and much needed new roads were built using local labour and paying them. One very successful project was the starting and training of "community health workers"; this was a simple but brilliant idea that worked and spread far out of the valley.

The VT had a mobile clinic and Mary would often go with the clinic into the Valley to help treat those with scabies and other illnesses. Seeing for herself the malnutrition that many children were suffering from led her to become a long-term member of the Emolweni Schools Feeding Scheme. This supplied simple but nutritious meals to a large number of schoolchildren (25,000 at one time). She drove the Feeding Scheme vehicle over the sometimes precipitous roads of the Valley for years, coming to know the heads and staff of the schools well and being the first to suggest that schoolteachers should become members of the Scheme's committee. She also helped Chris Carlisle and others in the packaging and weighing out of the lunch rations.

Mary often worked at the Black Sash Advice Office in Durban. Seeing the benefit that many workers and pensioners received at this office, she and some of her Black Sash colleagues and others, set up the Hillcrest Advice Office in 1972. It was an unofficial offshoot of the Durban Black Sash Advice office. It took Advice services closer to people in the surrounding rural area, particularly in the Valley of 1000 Hills where she had been involved for more than a decade. It assisted people to understand their rights under the law and to acquire those rights, such as Old Age Pensions, Disability Grants, unemployment pay etc. She assisted there regularly until she was 80 and occasionally until she was 82. She retired as a trustee when she was 87.

She also developed a great interest in education and assisted many young people to progress from school to university by helping to find accommodation, apply for bursaries etc. It was not the policy of Black Sash to assist financially but Mary started an education fund which became responsible for many young black graduates.  (The Hillcrest Advice Office and Bursary Fund still exists today and will celebrate its 50th anniversary on 3 June.)

Realising that an Advice Office in the Valley was what was really needed, she and others helped Winnie Mtakwende set up an Advice Office there so that those living close by could avoid the expense and inconvenience of getting to Hillcrest. Winnie still runs it to this day.

Mary was a calm, wise and balanced voice and always practical. She gave me courage when I was finding my feet in the Black Sash. Someone like Mary, with all her practical experience and knowledge was invaluable.

She had wide interests. She loved birds and was knowledgeable about the local species, (she and her husband, Duchesne, were guides at the time of the International Ornithological Conference). She also loved flowers and the countryside as well as water-colour painting.

Mary was very intelligent, kind, caring and loyal. Her empathy for all of those among whom she lived, especially those less fortunate than her, absorbed much of her time and thoughts. She will be very much missed by all who knew her.

She was a wonderful companion and I count myself very privileged and fortunate to have been her friend.