History of the Black Sash 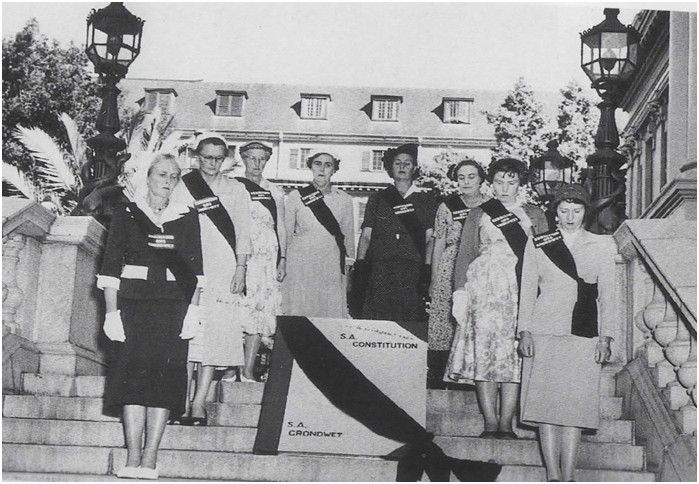 The black sash represented the mourning of the death of the Constitution. The women’s first black sash was draped across a symbolic replica of the Constitution while at a rally protesting the Senate Bill. The women decided to adopt the name of the powerful and metaphorical symbol they proudly wore. At the first National Conference in Bloemfontein in April 1956, the new name was officially inaugurated.

All members wore their black sashes as they held protest “stands” (standing outside of Parliament, courts and other areas representative of apartheid injustice). In the very early years they were also worn when “haunting” Cabinet ministers by standing in silence wherever the Ministers appeared – at railway stations, airports, and official functions. Sometimes the women would lay a piece of black fabric across the steps of buildings where they were protesting. With a black sash draped from their shoulders, the members became iconic for their dignified and elegant style of protest. In later years legislation was passed restricting their right to protest in groups, and they were forced to stand in lonely one-woman vigils.

Born in 1955 out of outrage over an artificial enlargement of the Senate that enabled entrenched clauses of the 1910 Constitution to be amended, the Black Sash has fought tirelessly against injustice and inequality in South Africa for nearly six decades.

When the first six women mobilised the support of thousands of others to march in protest against laws aimed at removing so-called ‘coloured’ people from the voters’ roll, they could have had little idea of what was to follow.It all started when the six middle-class white women - Jean Sinclair, Ruth Foley, Elizabeth McLaren, Tertia Pybus, Jean Bosazza, and Helen Newton-Thompson – met for tea on 19 May 1955 to discuss the specific Parliamentary Bill designed to increase the number of National Party representatives in the Senate in order to pass the Separate Representation of Voters Bill.Calling themselves the ‘Women’s Defence of the Constitution League’, they organized marches, petitions, overnight vigils, protest meetings and a convoy of cars from Johannesburg to Cape Town. They became known for the symbol of a black sash, worn by members, and draped over a symbolic replica of the Constitution when the Senate Bill and the Separate Representation of Voters Bill were eventually passed.Despite their failed challenge, the women of the League refused to pack away their black sashes, worn in mourning over the loss of Constitutional rights. Instead, they formally took on the name of the Black Sash and embarked on new campaigns against the erosion of civil liberties, racial segregation and the damage inflicted by the policy of migrant labour. 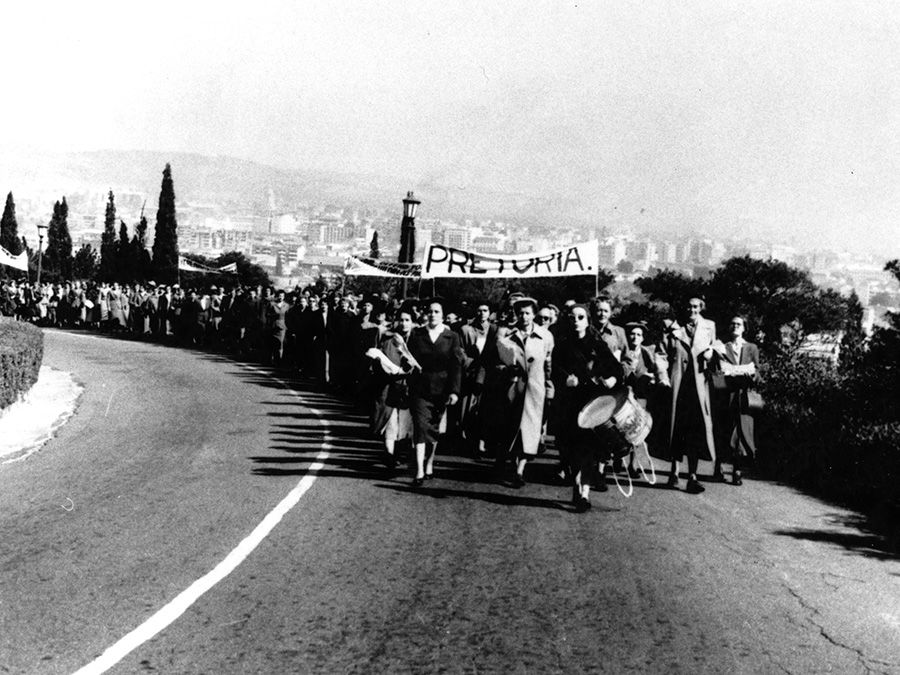 While the Black Sash’s initial focus was on constitutional issues, it expanded to include the moral, legal and socio-economic issues around racial discrimination. Black Sash members became more aware of the wider context of South African politics. In 1955 the Freedom Charter had been adopted in Kliptown by the African National Congress. In 1956 there was widespread opposition to the policy of influx control which restricted the rights of African people to move freely in their own country. In August 1956 a mass march of women affiliated to the Federation of South African Women took place in Pretoria – the largest gathering of women in the country’s history

The Black Sash too became increasingly concerned that African women were being arrested and imprisoned for contravening the pass laws. In Cape Town they set up a ‘Bail Fund’ which was used to assist those women who were arrested and imprisoned.Soon afterwards, the first Black Sash advice office was opened in Athlone in Cape Town, offering free paralegal advice and support. Over the next five years, advice offices were opened in five other centres, staffed mainly by volunteers and supported by men and women from the townships who acted as interpreters. The advice offices acted as a free resource for those who sought paralegal services for issues like housing, unemployment, pensions, influx control, detention without trial and so on.

In 1959, the Black Sash joined the campaign against the farm labour scheme. As means of punishment, ‘petty offenders’ could be ordered to work in rural areas without a court trial.

The organisation also protested against the Promotion of Bantu Self-Government Bill. A Bantustan (black African homeland) was a territory assigned to black inhabitants of South Africa and South West Africa (now Namibia). The purpose of this Bill was to create separate ethically homogeneous areas for South Africa’s black ethnic groups. The bill stripped black South Africans of parliamentary representation and made it legal to forcibly remove African people from land and homes in areas reserved for whites.The turmoil continued and in 1960, 69 people were shot dead at Sharpeville. South Africa’s first State of Emergency was declared and the Unlawful Organizations Act was passed, allowing for the banning of the ANC and PAC, and other organizations considered a threat to the Apartheid regime.During the early 1960s the Black Sash protested against issues like the segregation of libraries, the Undesirable Publications Bill and the denial of permission for Dr. AC Jordan to travel to the USA. The Black Sash also organized a five-day vigil to demonstrate against the Sabotage Bill outside Johannesburg City Hall and other centres.Initially, membership to the Black Sash was only open to female voters resident in South Africa (which signified white women). In 1963, all women residing in South Africa were able to become members of the Black Sash. Nevertheless, it remained mainly a “white” organization. 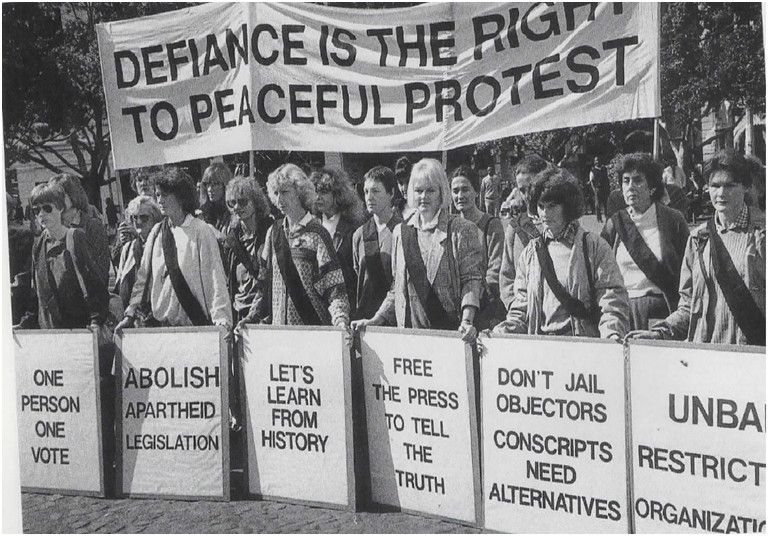 The following 20 years were bitter and difficult for those who actively opposed apartheid. Political movements and their leaders were driven underground or into exile and many opposition voices were brutally silenced. But the women of the Black Sash refused to give up or back down. Day after day, the women of the Black Sash stood in silent protest with their placards. Day after day, they continued to help those who queued outside the Black Sash advice offices. They sat in the courts, they witnessed the demolition of people’s homes and the forced removals of entire communities.

Their physical, witnessing presence enabled the Black Sash to speak with authority of what its members had experienced - in the courts and at Commissions of inquiry; monitoring at sites of forced removals, potential violence or police action. Every comment, every statistic, every statement issued by the Black Sash during these difficult years was underpinned and supported by these daily experiences - in the advice offices, in fieldwork and in personal witness. This strong foundation of first-hand knowledge earned the respect of many who came to rely on this information.In 1964, Nelson Mandela and other leaders of Umkhonto we Sizwe were sentenced to life imprisonment. Within the same year, the first East London Black Sash Advice Office was established. A year later in 1965, security police raided the Athlone Advice Office in Cape Town.As the force of Apartheid strengthened in 1970, so did the determination of the Black Sash to end it. The members’ protested vigorously against the Bantu Homelands Citizenship Act, which stripped African people of their South African citizenship.Resistance inevitably brought greater repression and many of the Sash women themselves were arrested, taken into detention, kept under surveillance and harassed during the traumatic 70s and 80s in South Africa. The Black Sash members used their protection and advantage afforded to their race in order to speak out against wrongdoings.Between 1960 and 1980, there were over two million pass law convictions. Open-air meetings were eventually prohibited so Black Sash members had to picket and protest individually. In 1985, the Black Sash Advice Office Trust was established to raise funds to support the work of the organisation.

When Nelson Mandela eventually walked free from prison in 1990, he made reference to the Black Sash in his first speech, delivered at the Grand Parade in Cape Town. He said ‘the Black Sash was the conscience of white South Africa’ during the dark days of apartheid.

Despite the terrible ongoing violence in the early nineties, the time had come to prepare for the building of a new nation. The Black Sash took part in the work to develop a new Constitution as well as in the debates about the nature of transition and the shape of the new society. They also engaged in extensive voter education in the run up to South Africa’s first all-inclusive election in 1994.Although Apartheid was over, the country was left battered, broken and divided. The Black Sash participated in the discussions which eventually led to the establishment of the Truth and Reconciliation Commission.In recognition of its forty years of effort, the Black Sash was awarded the Danish Peace Foundation’s Peace Prize in 1995.As the very foundations of South Africa began to change, the Black Sash too began to consider what its new role should be. Gradually, and at times painfully, it moved away from being an organisation that was member driven, and almost entirely made up of white women volunteers. By the end of 1995, the Black Sash had evolved into its current structure of a professionally staffed non-governmental organisation, led by a National Director, and accountable to a Board of Trustees.Currently the Black Sash works in three areas in the social protection arena, with an emphasis on women and children: rights-based information, education and training; community monitoring; and advocacy in partnership.