The Black Sash engaged around the looming crisis in foster care since the passing of the Children’s Act of 2005. The requirements of the Act have led to the foster care system, social workers and courts being critically overburdened.

Aim of this campaign

The Black Sash has been engaging around the crisis in foster care to ensure that relatives caring for orphans can access an adequate social grant and supportive services. The crisis emerged in the early 2000s when it became apparent that government’s choice to use the foster care system for reaching the high numbers of orphans was not effective or sustainable. In 2011 the High Court ordered the Department of Social Development to design and implement a comprehensive legal solution to the crisis. The Black Sash is part of a working group of NGOs led by the Children’s Institute and Centre for Child Law, that have been campaigning for reforms and putting forward options for a solution that would be in children’s best interests.

During 2013, the Black Sash advanced its call for a non-court-based foster care system. We made submissions at a two-day civil society consultation on the Children’s Act and Social Assistance Act reform in relation to extended family care and social grants, and to the Financial and Fiscal Commission. We motivated for an efficient system that facilitates the placement of children in safe homes, including with their grandparents and siblings, and enables these carers to access financial support. We argue that, following placement, the Department of Social Development should assess the home and provide psycho-social support, and a link to services such as the Department of Health’s primary health care support for orphans and vulnerable households. It will be important that a formal legal relationship is recognised between grandparents/siblings and the orphan/s at Magistrate Court level. This requires that the Children Act be amended to allow for guardianship applications to be made in the Children’s Courts so that this process is made more easily accessible and inexpensive to caregivers.

Our Johannesburg Regional Office was approached by Mrs Manana for advice after she went through the process of a foster care application with a social worker to support her care of her three orphaned grandchildren. Various meetings were arranged with the Child Welfare office where that application was administered and she was advised that the courts may not approve her application. Nonetheless, it was agreed, after consultation with our partners mentioned above, that the matter be referred to the relevant court.

As expected, the court ruled against her application. Our regional office had solicited legal services from LASA on behalf of Mrs Manana and the intention of appealing against the court ruling was to gain clarity on the position of grandmothers through the courts. Mrs Manana was represented by Mr Patric Setlhodi at the Krugersdorp Children’s Court, and later by Mr Michael Motaung at the South Gauteng High Court. We were particularly anxious to see the effect of the appeal following the earlier ruling on the Stimele case that dealt particularly with aunts and uncles who, by common law, do not have a legal duty to maintain their orphaned nieces and nephews and who were granted permission to access the foster care grant.

While Mrs Manana and other grandmothers do have a common law duty to maintain their grandchildren, the issue was how they would manage to do this without income support in the context of widespread poverty.

On 12 April 2013, Mrs Manana’s battle to qualify as a foster parent ended with victory in the South Gauteng High Court. The ruling meant that in Gauteng, grandparents, aunts, uncles and older siblings who take care of orphaned relatives would now qualify for R800 per child per month rather than the much lower childcare grant of R290. This South Gauteng judgement binds all magistrates in Gauteng and will be of persuasive value to magistrates in other provinces.

After the court victory, Mrs Manana submitted the relevant documents and we were delighted to learn later that she had been paid out, as per the order of court, and is now receiving the grant monthly without fail. We then worked with the Children’s Institute and the Children’s Law Centre, to explain the court outcome to the media, and we continue to work on the ground with organisations that experience the foster care crisis on a daily basis. 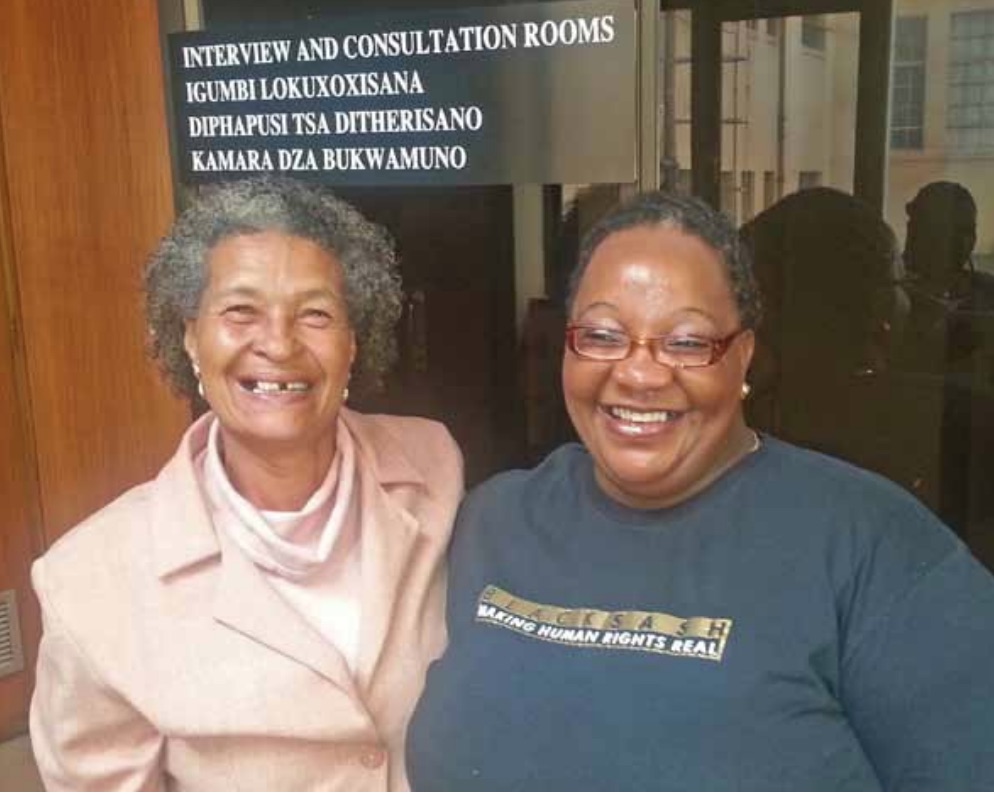 After a City Press interview with Mrs Manana, Thandiwe Zulu, Black Sash Regional Manager said, ‘Witnessing the interview with Ms Manana at her home was heartwarming and humbling. She was very hopeful in terms of the future of her orphaned grandchildren. She is planning to take them back to the school where they had been up until this year when she could not cope with the fees. She had registered them at a local school which hardly has clean toilets and the twins often complained about this. I was also privileged to see their reports. The overall average performance for the twins is between 80-100%. It is clearly vitally important to invest in our children as early as possible as that is likely to give us the best results in future. Nurturing and supporting them now is bound to give us, as a country, the best result as they grow to be adults. Credit for the outcome of this case must go to former Black Sash paralegal, Thifulufheli Sinthumule, as this was his case and he did a lot of groundwork on it. Credit should also be given to LASA as they were the representing attorneys on this case as early as the Children’s Court.’