Khulumas are part of our campaign to stimulate discourse and promote an active citizenry capable of holding government to account to help to ensure effective and efficient service delivery. Through regular Khulumas, we deepen our understanding of issues such as inequality, poverty, the economy, the roles of government and business in human rights, budgeting, resourcing and pro-poor policies.

The Role of women in food security

Our first Khuluma for 2022, held during Women’s Month, was an exploration of food and nutrition in South Africa, and the role that women play in ensuring food security. 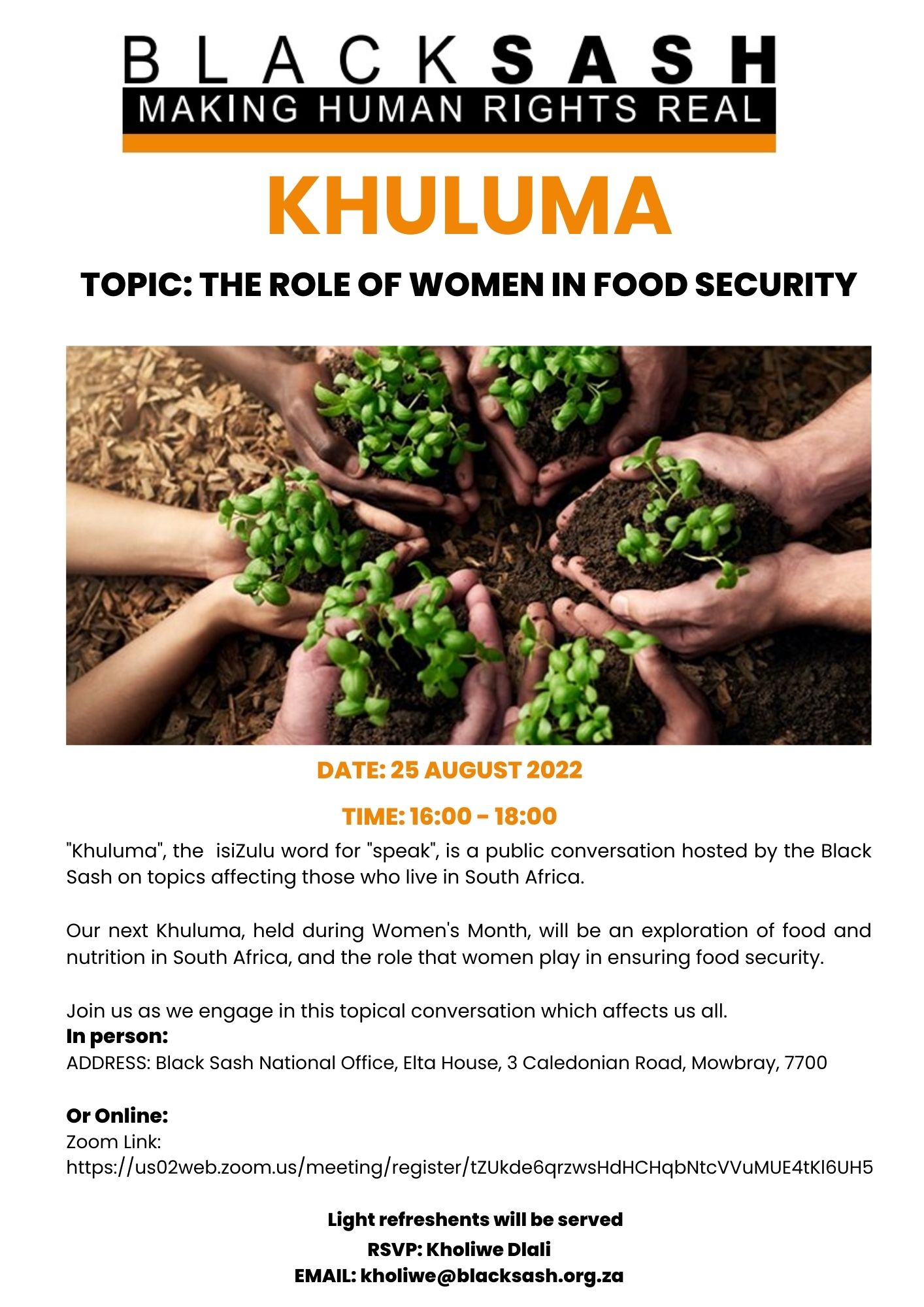 The Future of Policing in South Africa

Both the lack of adequate policing as well as the excessive use of force by police are disturbing norms in South Africa. Panelists discussed how to strengthen the political governance of the South African Police Service (SAPS) to ensure a more demilitarised approach to public order policing in keeping with existing as well as emerging legislation and policy. 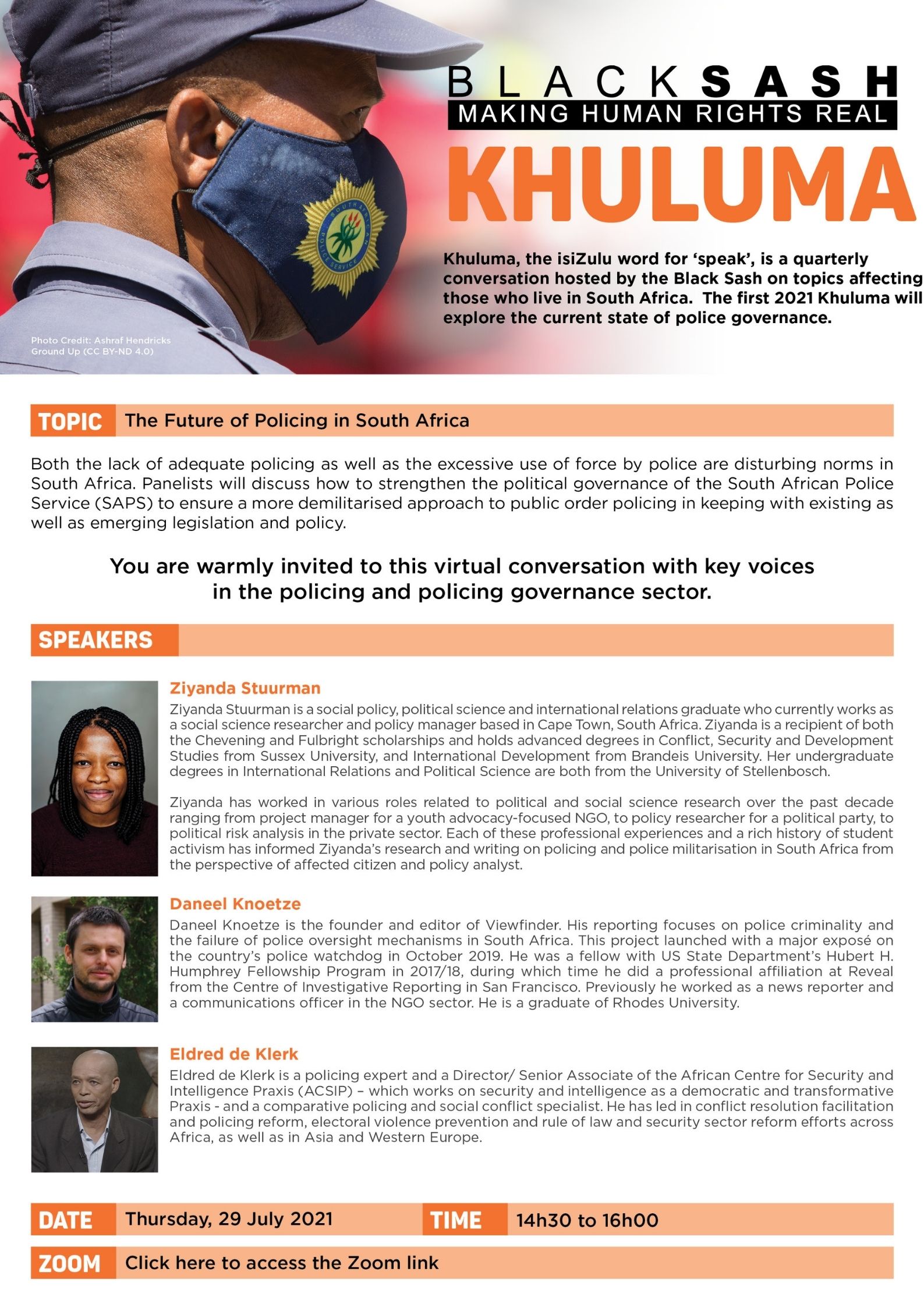 The Black Sash held its first 2019 Khuluma on 28 February in Mowbray, Cape Town.  Black Sash Trustee, Nolundi Luwaya, interviewed guest speaker Charles Abrahams, lawyer and author of his debut book "Class Action: In pursuit of a larger life".  The life of Charles Abrahams led him to study law, first in SA and then abroad - from the cape flats to law school in Amsterdam, to the courts in the United States. His work with the Black Sash, COSATU and the Children’s Resources Centre on the bread price fixing case, resulted in the right to Class Action. He and his associates used class action successfully to ensure that corporates in the mining sector and elsewhere take responsibility for their actions.

At our Khuluma on the 15th August 2019 we had a conversation with Dr Aninka Claassens to discuss her working paper on Mining Magnates and Traditional Leaders.

With the Traditional KhoiSan Leadership Bill now in its final stages with the National Council of Provinces, Aninka Claassens offers a timely evaluation of the role that law has played in characterising traditional leadership in a post-apartheid context. This special working paper forms part of a forthcoming MISTRA publication on Traditional Leadership and Customs in a Constitutional Democracy.

Khuluma on State Capture: Implications for governance and leadership of the SCA ruling

Our Khuluma on the 21st November 2019 was a conversation with Valencia Talene (Corruption Watch), Tracy Ledger (Public Affairs Research Institute (PARI) and Naushina Rahim (Open Secrets), where they discussed State Capture: Implications for governance and leadership of the SCA ruling ordering Cash Paymaster Services to pay back 316 million to SASSA.

Khuluma on Poverty and Inequality

The first Khuluma (conversation) run by the Black Sash on poverty and inequality focussed on a way forward for the captured state of social grants, while the second one explored land expropriation and the possibilities of a more inclusive city. We are hoping to hold another two this year on similar topical issues relative to poverty and inequality in South Africa.